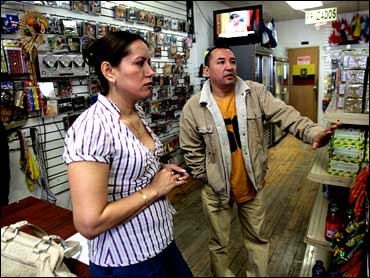 A Roman Catholic priest who monitors law enforcement treatment of minorities with a video camera released footage that appears to contradict the police account of his own arrest.

A police report says the Rev. James Manship was confronted and arrested Feb. 19 because he was holding an "unknown shiny silver object" and struggled with an officer who was trying to take it from him. But a 15-second video released this week by Manship's attorneys shows East Haven police Officer David Cari asking Manship, "Is there a reason you have a camera on me?"

"Well, I'll tell you what, what I'm going to do with that camera," Cari says as he approaches the priest. The tape then goes blank.

The arrest has reignited the debate about racial profiling and ethnic discrimination in East Haven, a working-class community of about 28,000 that borders New Haven. The shooting death of an unarmed black man by an East Haven officer in 1997 sparked harsh criticism by minority groups that has lingered. Manship and his parishioners say officers have been unfairly targeting Hispanics in recent months.

Hugh Keefe, a New Haven attorney who represents East Haven police, said the videotape shows only a small portion of what happened and confirms part of what Cari wrote in his report. He also said the tape doesn't show what happened from the time the camera was turned off until Manship's arrest.

Marcia Chacon, co-owner of My Country Store, where Manship was arrested, said Friday that the priest surrendered peacefully after the camera was shut off.

"He didn't say anything," she said.

Manship was not at his parish, St. Rose of Lima Church in New Haven, midday Friday and did not return a telephone message left Friday afternoon. He is due in court March 27 on misdemeanor charges of disorderly conduct and interfering with an officer.

Keefe criticized Manship for "creating controversy where none needed to be."

"You've got to conclude that he was out there with a video camera in an attempt, in my view, to provoke the police to do something," Keefe said. "If his goal was to attempt to stop the perceived harassment of the Hispanic community in East Haven by the police department, why didn't he go to the mayor's office?"

Chacon, a 36-year-old immigrant from Ecuador who moved to the U.S. 15 years ago and a parishioner of Manship's church, said she had called the priest to her store that day because the two officers were confiscating license plates displayed on the store's wall, saying they were illegal. She and her husband, Rodrigo Matute, were given a $372 ticket.

She said the seizure and ticket were part of a pattern of racial profiling against Hispanics by town police over the past eight months.

"I don't know why it happened," Chacon said of the priest's arrest and the seizure of the license plates. "We work very hard and ... everything we do is legal."

Keefe said there has never been a complaint, oral or written, about town officers harassing Hispanic people. If a complaint were filed, city officials would look into it, he said.

Last weekend, anti-immigrant fliers apparently printed by a white supremacy group were left in front of Chacon's store, she said. And on Monday, someone broke the window of her home's basement door, she said.