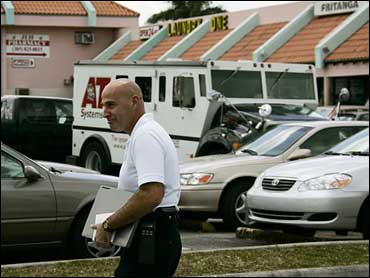 Two men robbed an armored truck of $1.8 million as it delivered money to a check cashing store Wednesday, authorities said. Shots were fired, but no injuries or arrests were reported.

The truck belonging to AT Systems was making a delivery to E-Z Checks Cash at a strip mall when a person approached a messenger who was with the vehicle, police Lt. Carlos Fojo said.

What felt like a gun was pointed at the back of the messenger, who was told to walk over to a car and throw the money in the backseat, the FBI said.

A getaway car fled with two robbers, and the messenger fired three shots as the car drove away.

An official at AT Systems Inc., which describes itself as a cash logistics company, refused to comment.