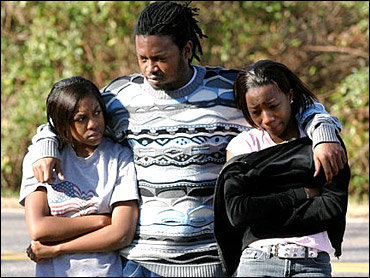 Eugene Arnold refused to let his 14-year-old son go joyriding with friends last weekend, a "fatherly instinct" that may have spared the teen from a horrific crash that killed seven of his peers following a police chase.

To be sure the message got across, Arnold brought his son, Nellow Brown, to the scene of the crash Monday.

"I wanted to let him see firsthand the loss of five, six or seven of your best friends," Arnold said.

Arnold said he refused his son's pleas to join companions on Sunday night. "I told him he was too young," Arnold said. "Call it fatherly instinct."

Arnold is among those in this rural North Carolina town who believe too much speed and too little driving experience caused the deadly crash. But some residents questioned whether a police officer might have chased them to their deaths.

The officer began chasing a 2001 Dodge Intrepid after he saw it weaving in its lane on U.S. Highway 21. The chase ended just after midnight when the car — which had allegedly been stolen — hit an embankment, flipped and landed in a creek.

The Highway Patrol said none of the victims had driver's licenses or wore seat belts. The car had a spare tire on the right rear and was traveling at between 80 and 100 mph at the time of the accident.

Troutman police Chief Eric Henderson said Monday that Officer Keith Bills followed proper policy during the short chase and will take off a couple of days before returning to duty.

"He's upset. We're all upset. Naturally, it's very upsetting when you lose a life," Henderson said.

Howard Hurtt said his son and his friends had recently been borrowing cars from people they knew. He said he tried to get his son to stop the joyriding, but questioned why the group was pursued.

"I've always been told that the patrolmen should follow them, but don't push them," Hurtt said. "They were just out joyriding and a cop pulls them over and here we have seven deaths. I lost my only son."

Reed was being investigated for his possible role in a home-invasion robbery in Mooresville on Sunday night, Police Chief John Crone told The Charlotte Observer. Four of the six robbery victims identified Reed as one of the two assailants, Crone said.

The pursuit was captured on a video camera installed in Bills' patrol car, Henderson said. The chief said he had not yet viewed the tape.

North Carolina's transportation department said the crash was the deadliest in the state since 10 Plymouth High School students died in a wreck in 1997.

Troutman is about 35 miles north of Charlotte.