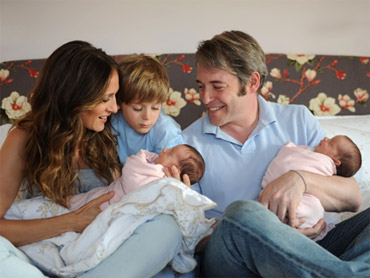 ST. CLAIRSVILLE, Ohio (CBS/AP) File it under really weird and very creepy. Two Ohio police chiefs stand accused of snooping on the surrogate mother for actors Sarah Jessica Parker and Matthew Broderick, in order to grab some goodies to sell to paparazzi.

The pair was charged with several felonies on Friday.

Both men pleaded not guilty and are free on their own recognizance. Neither of the men could be reached for comment. There are no residential telephone listings for them.

Hervey said that Carpenter is alleged to have entered the home of Michelle Ross and removed items from the home identifying Ross as the surrogate mother. Along with Dojack, Carpenter attempted to sell the items to photographers, Hervey said.

"It is extremely troubling that the persons sworn to uphold the law and protect the public are now charged with violating those oaths," Hervey said.

He also said it was troubling that society "is so celebrity crazed that a market exists and tens of thousands of dollars are exchanged for pictures and stories of celebrity scandal."

"Unfortunately, the city and Belmont County are now living their own Hollywood soap opera," the prosecutor said.

The alleged burglary took place in mid-May in the eastern Ohio town of Martins Ferry, and the allegations against Carpenter and DoJack surfaced about a week later.

Ross is no longer believed to be staying in the Martins Ferry area, officials have said.

The surrogate mother gave birth to twins June 22 at an Ohio hospital was not home at the time of the alleged burglary.