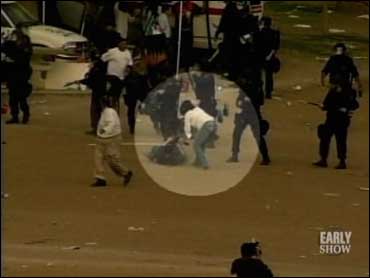 Police Chief William J. Bratton said Wednesday some of the police tactics to clear immigration protesters from a park were "inappropriate," as numerous news videos showed officers striking people with batons and firing rubber bullets into crowds that included children.

Amid the cries and chaos, photographers were kicked, their camera's tossed. KCBS cameraman Carl Stein was knocked to the ground. So was reporter Mark Coogan.

"This is strictly my opinion," Coogan told Whitaker. "It was utterly uncalled for. It was overkill to the nth degree."

Some injured people were seen in the videos, including a Hispanic man with a bleeding welt on his stomach.

Bratton promised an investigation, and said he would discuss the matter further at a news conference later Wednesday.

"Quite frankly, I was disturbed at what I saw," Bratton told KNX-AM. He said the actions of some officers "were inappropriate in terms of use of batons and possible use of non-lethal rounds fired."

The clash at MacArthur Park started after 6 p.m. when police tried to disperse demonstrators who had moved off the sidewalk onto the street. Authorities said several of the few thousand people still at the rally threw rocks and bottles at officers, who fired rubber bullets and used batons to push the crowd back onto the sidewalk.

"(Police) started moving in and forcing them out of the park, people with children, strollers," said Angela Sambrano, director of the Central American Resource Center.

Several people, including about a dozen officers, were hurt. About 10 people were taken to hospitals for treatment of injuries including cuts, authorities said. None of the injuries was believed to be serious. At least one person was arrested, but police have not released a name.

Maria Elena Durazo, the executive secretary-treasurer at the Los Angeles County Federation of Labor, said the trouble was instigated by "a group of anarchists, not associated with the rally."

Spanish-language TV station Telemundo said one of its reporters and three camera operators had been injured and taken to the hospital by police. Fox 11 aired video of a station camerawoman apparently being struck by a baton-wielding police officer in riot gear.

The Radio and Television News Association of Southern California called for an investigation.

"There is evidence that officers knocked reporters to the ground, used batons on photographers and damaged cameras, possibly motivated by anger over journalists photographing efforts by officers to control the movements of marchers," the group said in a statement.

Mayor Antonio Villaraigosa, who was traveling in El Salvador during a trade mission, said the incident was "a most unfortunate end to a peaceful day."

Protesters marched in cities from Miami to Detroit to San Antonio attempting to convince Congress to create a path to citizenship for the estimated 12 million illegal immigrants in the United States. Tuesday's protests were far smaller than similar demonstrations a year earlier that drew hundreds of thousands of people in some cities, including Los Angeles.