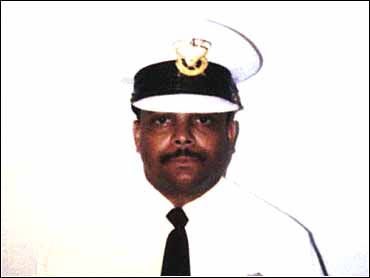 A police officer trying to stop a car driven by a 12-year-old boy was dragged about 800 feet to his death early Friday as he tried to snatch the keys out of the ignition, police said. The boy was shot to death by the officer.

Officer Kevin Crayon, 40, died of head injuries suffered when he fell from the moving car, police said prior to receiving a coroner's confirmation from an autopsy. The driver, Courtney Mathis, died about four hours later after undergoing emergency surgery at Children's Hospital Medical Center.

Witnesses to the confrontation in a convenience store parking lot told police that Crayon reached into the car after Courtney refused to show the officer a driver's license about 12:45 a.m., Police Chief Thomas Streicher Jr. said.

Crayon had remarked to a bystander just before the encounter that Mathis looked too young to drive, police were told. The witnesses said the boy began backing the car erratically toward several small children.

"I'd like to think the officer was trying to save the children from serious injury or death," Streicher said. "Unfortunately, as the result of his own actions trying to save someone's life, he sacrificed his own life."

Courtney drove off zigzagging down the street as Crayon pulled out his service revolver while being dragged, witnesses told police.

"Officer Crayon fired one round, striking Courtney Mathis in the chest area," the chief said.

Though wounded, Courtney continued driving and struck another car before he drove home and told family members he had been shot by police, Streicher said. Family members called 911.

The maroon Ford Taurus that Courtney was driving belonged to a family member who had been unaware what the boy was doing, police were told.

Streicher said it is premature to comment on Crayon's use of deadly force, because investigators still have questions about what occurred.

Crayon, a father of three, had been a Cincinnati officer since 1996.

The officer died "because some young punk was driving a car. It's unbelievable," said Keith Fangman, president of the local Fraternal Order of Police. Across the street from police headquarters, flags at a memorial for slain officers flew at half-staff.

It marked the first Cincinnati police death since two officers were killed in December 1997 while trying to serve a warrant.