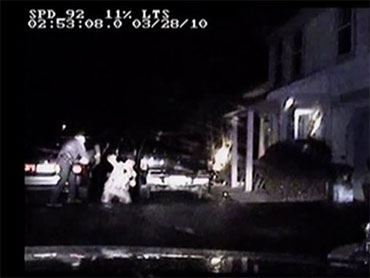 A suburban Chicago police officer caught on video hitting a driver 15 times with his baton and firing a stun gun at the man's passenger has been charged with felony aggravated battery and official misconduct, and more charges are possible, prosecutors say.

In fact, the video taken from the officer's dashboard camera suggests that both the driver, Ronald Bell, 28, and the passenger did exactly as they were told.

" Perhaps the most startling thing about the brutal beating is the apparent overkill," observes CBS News Correspondent Cynthia Bowers.

"This conduct as displayed on the video by this officer is not only disturbing, it's outrageous and is unacceptable," Cook County State's Attorney Anita Alvarez said during a news conference. "Every law enforcement officer holds his or her powers through the public trust and this officer's senseless act of rage against an unarmed citizen constitutes and offensive violation of that trust."

Mandarino, 41, a 15-year police veteran, was charged with felony aggravated battery and official misconduct. If convicted, he could face up to five years in prison on each count.

Mandarino did not enter a plea during a brief hearing. The judge set his bond at $50,000.

Mandarino's attorney, Ed Wandering, says Mandarino's record speaks for itself. "He's a decorated officer," Wandering says. "He was officer of the year three or four years ago."

Prosecutors said Mandarino followed the car and pulled it over after he heard its tires squeal shortly before 4 a.m. on March 28. After Bell pulled into the driveway at the home of his brother, Stacey Bell, and climbed out of the vehicle, Mandarino approached him with his gun drawn, Alvarez said.

While there is no audio on the video, it appears that Ronald Bell got back into the car after Mandarino ordered him to. Mandarino then turned to the passenger, who had also gotten out of vehicle, and fired a stun gun at him twice, Alvarez said.

Ronald Bell then got out of the car, put his hands in the air and got down on his knees while keeping his hands behind his head, apparently on orders from Mandarino. That's when Mandarino repeatedly struck Ronald Bell on his head, neck and shoulders, Alvarez said.

On "The Early Show Saturday Edition", Stacey Bell told CBS News Correspondent Jeff Glor, "I saw the officer striking my brother. It kind of was very shocking to me, and I went outside and was pleading with them to stop beating my brother. I was saying, 'He's complying with your commands. I don't understand why you're beating him." '

Ronald Bell suffered a concussion, a cut on his ear that required seven stitches and various bruises. The passenger wasn't injured.

"He's recovering," Stacey Bell told Glor. " ... He just doesn't want to make any statements to jeopardize the case against the officer."

Mandarino arrested Ronald Bell on suspicion of drunken driving, resisting arrest, threatening an officer and various traffic offenses. All of those charges have been dropped, Alvarez said.

She would not say what, if anything, the officer said to justify his actions.

The charges against Mandarino stem from the alleged beating. No charges were filed in connection with the officer's use of the stun gun, but more charges are likely, Alvarez says.

Police department officials saw the video and notified Alvarez's office within 24 hours of the incident. Mandarino has been placed on paid administrative leave, the police department said in a statement that announced the officer's arrest but declined further comment.

Stacey Bell remarked to Glor that he's "not happy with the fact that this guy's on administrative leave. I don't think he should be getting paid by the residents of Streamwood after the actions we witnessed."