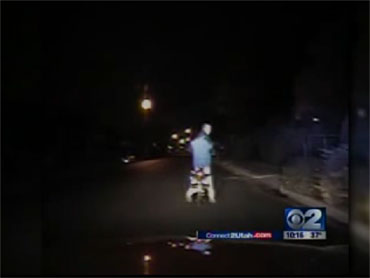 A Utah man who suffers from cerebral palsy, epilepsy and other disabilities was stopped while riding a motorized bicycle and charged with DUI after admitting he takes medication.

Tilt, whose left leg is shorter than his right, told the officer that he would likely fail the test (which requires him to put one foot in front of the other), and he did. Tilt told Steed he did not have a driver's license - he'd given it up 15 years before due to his seizures.

After asking Tilt if he took medication for his epilepsy, she handcuffed him.

According to Tilt, when he asked if he were being arrested, Steed replied, "Yeah, for DUI."

Ironically, Tilt had forgotten to take his medication that night.

In defending the trooper's actions, Utah Highway Patrol told KUTV that many people drive under the influence of prescription medications.

They also praised Steed, who was named Trooper of the Year in 2007 for her arrests of drivers suspected of being under the influence. Over the past eight she has made nearly 800 DUI arrests, roughly half that in 2009 alone.

UHP Captain Bob Anderson told Jones that he was confident Steed followed procedure and the law.

Jones himself described Steed as "absolutely dedicated to getting drunk drivers off the road."

Tilt's daughter, Courtney Tilt, told Jones, "If she's proud of taking in an epileptic patient for a DUI, I don't know what to think of her and her character."

But further investigation by KUTV found cases where Steed was chastised by judges for allegedly disregarding UHP procedures, in one instance calling her actions "especially troubling." Another judge said she "lacks credibility."

In some instances (though not in Tilt's case) Steed conducted field sobriety tests out of view of her police car's dashboard camera, counter to UHP policy.

Defense attorney Glen Neeley, who has represented several people stopped by Steed, said to Jones that Steed's goal is to pull over as many people as possible with the goal of making DUI arrests.

After KUTV began looking into Steed's record, UHP contacted the station, telling them they'd started their own inquiry of the trooper's actions.

"Was it consistent with what we're trying to do with our overall perspective of DUI enforcement and review of it? No, it wasn't," Capt. Mike Rapich told the station of the Tilt case. "This individual is not to be prosecuted for DUI."

So Tilt is off the hook - but so is Steed. UHP stands behind Steed's other DUI arrests, saying they "conform to prescribed procedure and the law."