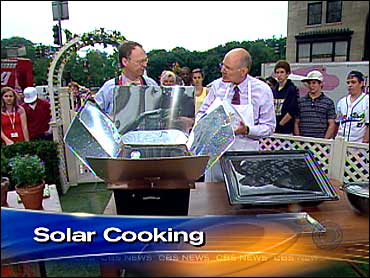 If you don't want to heat up the stove or grill on a really hot day, there's another source of energy to cook food with — and it's directly overhead: the sun!

Solar cookers, devices that use the sun prepare food, are drawing increased attention because of the fuel they employ, and because they add a lot of flavor to meals.

Kimball, the creator and editor in chief of Cook's Illustrated magazine (www.cooksillustrated.com), explained that solar cookers not only use nothing more than the sun's rays to work, they don't emit smoky fumes, and use only minimal amounts of water. They're environmentally friendly, economical, and over 100,000 of them are now in use in India and China.

But are solar ovens nothing more than eco-toys?

At America's Test Kitchen, we put this proposition to the test to find out just how well they roast a chicken, cook rice and broccoli, and bake chocolate chip cookies.

The first solar cooker was invented by a Swiss naturalist in the 18th century. But even in Roman times, the notion of reflecting and/or trapping the sun's rays to produce heat was common. In fact, greenhouses are large-scale solar ovens in that they trap the heat of the sun, enabling horticulturists in northern countries to grow plants usually found only in the tropics and other warmer climates.

The impetus for using solar cookers today is largely political and environmental. Since solar cookers don't require any fuel, don't create smoke pollution, and cook using a minimum of water, they're attractive for use in low-income regions around the world and are useful for people who have limited access to any sort of cooking device other than fire.

Most solar cookers are produced by non-for-profit organizations; profits from cookers sold in the United States or Europe subsidize cookers shipped elsewhere.

In the U.S., sales are geared to several audiences: those who advocate environmentally sound practices, people (especially those in sunnier climates) who want a fuel-efficient way to cook that doesn't heat up the kitchen, outdoor recreationists who like their portability, and food hobbyists who enjoy cooking in a different fashion.

How Do They Work?

To cook effectively, it's necessary to understand some of the science that makes solar cookers work, primarily that it's not the sun's heat that cooks the food, rather, the sun's ultraviolet rays.

The sun must be high in the sky for the ultraviolet radiation to penetrate the atmosphere. For example, from November through March, the sun is so low on the horizon that the light passes through more atmosphere, screening out most of the UV rays (that's why it's difficult to get a tan in winter). When the sun is overhead, the light rays pass through less atmosphere, and screen out less UV radiation.

Once the UV rays enter the cookers, they act as a filter/converter, letting the shorter UV light rays in and converting them to longer, infrared light rays that can't escape (like a one-way lobster trap).

In practice, this means that successful cooking requires a clear sky, with the sun at least 45 degrees or more above the horizon for a reasonable amount of time (depending on what you're cooking, from two to eight hours).

There are two easy ways to test for suitable conditions — if your shadow is shorter than your height, or if the UV index in your area is seven or higher (see below for a Web source of the daily index as well as other information).

We purchased one of each model. The Hot Pot Solar Cooker ($100) is a large, insulated pot that sits on and is surrounded by reflector shields (metallic panels that concentrate the sun's rays at the pot). Our hot-box model, the SOS Sport solar oven ($140), is a box with a specially molded insulating lid and insulated sides. The Sun Oven ($200) is a hybrid: the box has insulated sides, a glass top and, additionally, is ringed by reflectors

Our test kitchens are located just outside of Boston, which isn't the ideal location for solar cookers (our UV index rarely gets above seven, and cloudless, haze-free days aren't a given) but, with a little planning, we had ample testing days. One additional challenge was finding a place in our urban setting that had uninterrupted sun for at least six hours; a pilgrimage to the roof provided the solution.

Once on the roof, all three cookers were easy to set up and use. The hot pot required no additional equipment and the SOS Sports oven came with two that we used in the two ovens. (Ideally, you should use a dark, light-weight, metal, shallow pot — Graniteware is a good choice).

To conduct our testing, we'd open the stoves or set up the reflectors on the hot pot, put the food in the pots, and orient the cookers toward the sun; once every hour or so, we'd reposition the ovens to follow the sun and check on the food.

What the cookers cooked well, they cooked very well, especially those items that appreciated long, slow cooking and could generate sufficient internal moisture to stay moist and tender, such as the whole chicken, baked potatoes, garlic, and marinated pork. But time-sensitive and/or drier food presented a challenge, especially since the cookers proved very sensitive to temperature fluctuation, either from being opened to check doneness or from passing clouds.

The cookies were the only time-sensitive food we liked, largely because we could check on their progress without opening the ovens (we could see through the lids), and we were conscientious about checking them frequently. But, despite checking frequently, we never got the rice right — we couldn't catch it before it was blown out and starchy, nor the broccoli, which turned army green and had a skunky smell by the time it was tender.

A Word About Food Safety

We reserved cooking meat and poultry for cloudless days and peak cooking times (between 10 a.m. and 2 p.m.), which kept our food safe (internal food temperatures shouldn't remain between 40 degrees and 140 degrees for more than two hours). However, during less-than-perfect days, we would have reservations, especially if you're not able to monitor internal food temperatures.

The U. S. Department of Agriculture has published a caution about solar cookers, noting possible problems both with how long it takes for the food to start cooking and how hot the cooking temperature becomes. If you want more information, you can go to this Web site.

For those who live where cloudless days can be predicted reliably, solar cookers can be good secondary cooking sources. For others, especially food hobbyists, they can be a lot of fun.

But there are drawbacks that keep solar from becoming a reliable or primary cooking source: