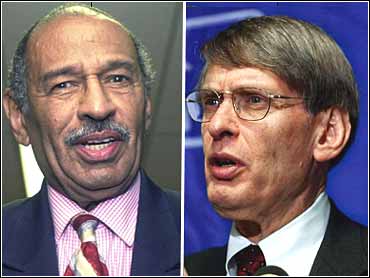 Bud Selig was urged to resign by the House Judiciary Committee's ranking Democrat, who said the commissioner appeared to violate major league rules in a 1995 loan from a company controlled by the Minnesota Twins owner.

Rep. John Conyers Jr. of Michigan said Wednesday the loan created an "irreparable conflict of interest" for Selig in his plan to fold two franchises, a proposal that most likely would include the Twins.

"In light of this disclosure and your apparent unwillingness to reveal other financial information that you assert supports your decision to eliminate two baseball teams, I regret that I must call on you to resign as commissioner of major league baseball," Conyers wrote in a letter to Selig that the congressman released.

Selig sent a two-page letter to Conyers, saying he "was both stunned and disappointed to receive your letter."

"Let me be unequivocal," Selig wrote. "The suggestions made in your letter are wholly unacceptable."

Conyers accused baseball of lying to the committee and asked Rep. F. James Sensenbrenner, the committee chairman, to hold another hearing on baseball's antitrust exemption. Conyers was critical of Selig when the commissioner testified in Washington last month.

Selig admitted this week that in 1995, a company controlled by Minnesota Twins owner Carl Pohlad arranged for a $3 million loan to the Milwaukee Brewers, run at the time by Selig and now by his daughter, Wendy Selig-Prieb.

Former commissioners Bowie Kuhn, Peter Ueberroth and Fay Vincent said the loan was unprecedented and might have broken the rule prohibiting loans from the owner of one team to another without approval of all the teams in that league and the commissioner.

Selig, in his first public response to the revelation of the loan Tuesday, told Conyers the Brewers' "survival was in question" at the time of the loan, which followed the 232-day strike that wiped out the 1994 World Series.

"To suggest somehow that there is a conflict of interest between this and the contraction decisions made by the clubs in 2001 and 2002 is preposterous," Selig wrote.

"Our conflict rules regarding loans from club to club are to prevent undue influence being exerted by one team over another. This was a short-term loan from a lending institution which was owned by the family of an owner, and was at arm's length and for a commercial rate of interest. The loan was made and paid in full six years prior to any consideration of cotraction by the industry."

Selig cited a decision by baseball's executive council earlier in 1995 to approve banks who had loaned money to other teams and to players as non-controlling investors in the Arizona Diamondbacks.

"The executive council determined not to consider that a conflict under the rules," Selig wrote. "As a result, I do not view the Brewers' loan to be an issue. In addition, the loan was made and paid off prior to the next scheduled owners' meeting. I am absolutely confident that had the loan been outstanding at the time of the meeting, it would have received approval at that time."

Conyers claimed that "according to industry experts, the Brewers stand to double their television revenue if the Twins are eliminated."

"The Brewers expect no increase in either ticket sales or broadcast revenues if the Twins are in fact one of the teams eliminated," Selig responded. "It is our full intention to retain existing broadcast territories and protect the contracted Clubs' territories as an asset of the industry as a whole."

Conyers also contested a letter he received from Bob DuPuy, Selig's chief lawyer, saying the committee staff "worked out a solution" that would allow the players' association to discuss detailed financial information it had received in confidence from the commissioner's office.

"Baseball's representation that an agreement had been reached on the disclosure of financial information to the committee is blatantly false and fails to satisfy my request," Conyers said. "It also appears to bolster the assertions of union representatives, namely that if all records were publicly disclosed, your claims about the financial health of major league baseball would be proven to be false."

DuPuy said he had reached the agreement with Perry Applebaum, a member of Conyers' staff. Applebaum could not immediately contacted for a response.

By Ronald Blum © MMII The Associated Press. All Rights Reserved. This material may not be published, broadcast, rewritten, or redistributed