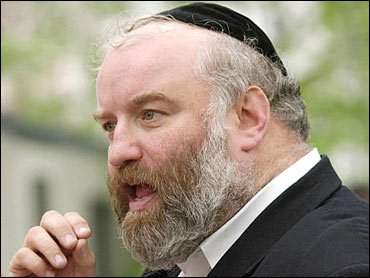 A federal jury on Wednesday convicted a black man in the stabbing death of a Jewish scholar during a 1991 riot in Brooklyn's Crown Heights neighborhood that widened New York City's racial divide.

The 1991 riots began after a Jewish driver accidentally struck two black children, killing 7-year-old Gavin Cato. Yankel Rosenbaum, a visiting scholar from Melbourne, Australia, was stabbed as a gang of blacks yelled, "Get the Jew!"

The violence turned the Brooklyn neighborhood shared by ultra-Orthodox Jews and Caribbean blacks into a national symbol of ethnic hostility. It came two years after other high-profile racial incidents in New York, including a fatal attack on a young black man in Bensonhurst, and the beating and rape of a white jogger in Central Park.

On Wednesday, after three trials in 12 years, Lemrick Nelson, 27, was found guilty by a federal jury of violating the civil rights of Rosenbaum. Ruling on a separate question, the jury found that Nelson's actions did not result in Rosenbaum's death.

As a result he faces up to 10 years in prison, rather than a possible life sentence.

Nelson slumped in apparent relief on hearing the verdict that spared him a possible lifetime behind bars.

During the 1990s, Nelson was acquitted of state murder charges and convicted of federal civil rights charges, a verdict that was overturned because the judge tampered with the racial makeup of the jury. The defense at those trials had insisted Nelson was not the killer.

This time, the defense did not deny Nelson stabbed the 29-year-old Rosenbaum but said it had nothing to do with the fact that the victim was Jewish — a key element needed for a conviction.

Instead, the lawyers said Nelson, then 16, had been drinking beer all day and made a "horrible mistake" as he was swept up in the mob mentality.

Prosecutor Lauren Resnick countered that Rosenbaum was killed "not because of anything he'd done, but because of who he was — an Orthodox Jew."

During six days of testimony, police witnesses said Nelson appeared sober when he was arrested.

One officer said Rosenbaum cursed and spit blood at Nelson while identifying him as his attacker. Another officer described searching the suspect's pockets and finding a bloody knife that was linked to the victim through DNA.

The deliberations were not easy: The jury repeatedly sought clarification on whether it could convict Nelson of civil rights violations if it concluded that he wasn't the killer. At one point, U.S. District Judge Frederic Block told attorneys the jury was "muddled, confused and a little out of touch" with his instructions.

The Crown Heights case altered city politics for the next decade.

A 1993 state investigation concluded that Mayor David Dinkins "did not act in a timely and decisive manner" in deploying police to Crown Heights. And four months after that, the city's first black mayor was ousted by Giuliani, whose campaign ads included this attack on Dinkins: "Then he becomes mayor and we get ... the Crown Heights riots."

In the years since the riots, black and Hasidic community leaders worked hard to bridge their differences, forming groups to talk, play and learn together. In 2001, the father of Cato and the brother of Rosenbaum met publicly for the first time and called for greater understanding and dialogue.

The case against Nelson, however, did not go away.

When Nelson was acquitted of state murder charges in 1992, Jewish protesters flooded the streets of Crown Heights. The next day, federal prosecutors announced an investigation into the case and Nelson was later sentenced to 19½ years in prison for violating Rosenbaum's civil rights.

But that conviction was thrown out last year by an appeals court that faulted the trial judge for tampering with the racial makeup of the jury.