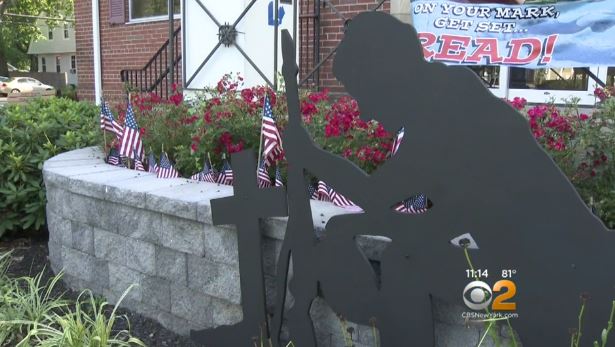 Outside of Veterans Memorial Library in Roselle Park is a silhouette of a soldier kneeling at a cross. It's become the center of controversy among residents including Gregory Storey, reports CBS New York.

"It's a very touching memorial, but the problem is there's a cross in it. It singles out veterans of one religion, and in doing so ignored and disrespects veterans of all other religions, or no religion," Storey said.

The memorial -- paid for by Mayor Carl Hokanson -- was installed on July 29, by city workers and came as a surprise to the board that runs the library.

"The mayor is my boss, we listen to him, but it was not put through the board of trustees," Interim Library Supervisor, Kit Rubino said.

Storey said the memorial violates the separation of church and state and contacted the American Humanist Association.

"This letter serves as an official notice of the unconstitutional activity, and demands that the borough remove the cross from government property immediately," a letter from the association said.

"Generations of veterans have fought and died to defend that constitution that he is now violating," Storey said.

The mayor -- a former Marine -- wouldn't go on camera, but said over the phone that the memorial is about respect to all veterans.

Residents were split on the memorial's message.

"Not that the silhouette is wrong, but it's just wrong for imposing one's will on other people," Jacob Magiera said.

"I happen to think it's a beautiful memorial, my husband is a veteran," one woman added.

The borough council was set to meet Thursday to decide what to do about the memorial.

This is not the first religious controversy in Roselle Park.