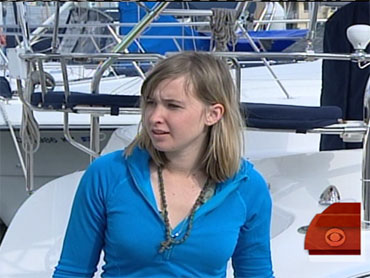 A 16-year-old has set out to become the youngest person to sail around the world alone and without stopping -- and the attempt is causing quite a flap in the boating world.

Abby Sunderland, of Thousand Oaks, Calif., sailed into the sunny, calm Pacific Ocean Saturday after being delayed a few days by a series of violent storms hitting California.

Her boat-builder father, Laurence, along with other family members and friends, cheered at the Del Rey Yacht Club as they watched the 40-foot craft, called Wild Eyes, depart.

Abby plans to be at sea for five or six months. She'll be alone, but able to communicate via satellite telephone and a blog, at .

The current record-holder is 17-year-old Mike Perham, of Britain, who took the mark last year from Abby's then-17-year-old brother, Zac.

He docked at ports on occasion for repairs and supplies. Abby plans to remain at sea the entire time.

And, reports CBS News Correspondent Kelly Wallace, Abby's trip is setting off winds of controversy as she heads into potentially rough waters, with critics accusing her parents of being irresponsible for letting her try.

Her route will take her from Southern California south, then around Cape Horn (South America's southern tip) where, according to American Sailing Association Executive Director Charlie Nobles "you can literally have waves of 100 feet" if the weather turns nasty.

From there, Abby would head into the Southern Atlantic, known for having the roughest waters on the planet.

"It is dangerous," Abby concedes, "but you have to kinda understand what you're getting into and be ready for it."

Then, it would be across the Atlantic, around the Cape of Good Hope, through the Indian Ocean and back into the Pacific.

Her father says Abby is ready for the challenge, observing that, "She's pretty much been in training for this her whole life."

Abby notes she "decided to do this when I was 13 years old."

And, to critics who say she's too young and the trip too dangerous, Laurence Sunderland asserts, "I don't agree with them. Not everybody should be put into a box, the boxes of society."

Abby's boat is state-of-the-art and fully-stocked for an unassisted trip, Wallace points out.

Does a 16-year-old girl have the stamina for a grueling, six-month trip in heavy seas?

Says the Sailing Association's Nobles, "(There's a) need for a lot of strength and endurance. That's very, very important for these kinds of voyages."

But, says Wallace, Abby seems more concerned about missing her high school graduation. "I'm actually gonna bring my school books with me. Who knows how much of that is gonna get done?" she laughed.

Sailing officials aren't happy with the trend toward "youngest ever" sailors. And they emphasize the risk is great. "More people have climbed Mt Everest than have circumnavigated the globe" in a sailboat, Nobles notes. In fact, his organization says only 250 people have ever sailed around the world in a sailboat.

Some sailing officials are calling for an end to keeping records for the "youngest ever" to do something, Wallace adds, to try to discourage more kids from trying it.

In August, a 13-year-old Dutch girl sued for the right to sail around the world alone. She was placed in the custody of child protection services and barred from leaving the country.

And another 16-year-old, Aussie Jessica Watson, is marking her hundredth sday at sea Monday, going after the same record Abby is, Wallace says. She just faced a violent storm with 70 mile per hour winds and high seas as she rounded Cape Horn but, according to her blog, she's doing fine and loving it!