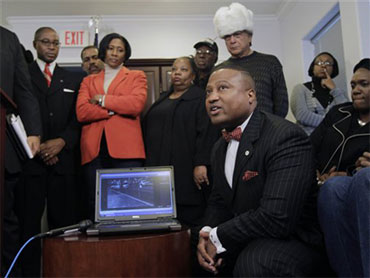 An explosive videotape that appears to show a group of Houston police officers beating a black teen burglary suspect last March has led to the firing and indictment of those officers, and a flaring controversy.

A surveillance camera caught the end of a police chase of 15-year-old Chad Holley, who had allegedly burglarizing a home.

Holley goes right to the ground, face-down, hands over his head, as if to surrender.

But then, reports CBS News correspondent Seth Doane, one officer appears to stomp on Holley's head, while others kick him. One cop seems to land five kicks. Then, another officer punches him again, and again. As he's picked up, there's another kick.

"They just started kicking me from there, and I blanked out," Holley says.

The video wasn't supposed to be seen yet by the public, but was leaked by community activist Quannel X of the New Black Panthers Party this week.

He told "Early Show on Saturday Morning" co-anchor Russ Mitchell he was "shocked" when he first saw the tape.

"I was appalled," he said. "I was absolutely angry at what they were doing, these police officers, to this young man who was on the ground. You could clearly see he surrendered, he gave up, and the beating he took was absolutely unnecessary. It was shameful."

"We hear these stories all the time in our community, all the time," local NAACP President D.Z. Cofield told reporters. "We just happen to have one that was caught on tape."

A federal judge had barred the release of the video before a trial scheduled this summer, but then came the leak.

Four officers have been indicted, charged with "official oppression," a misdemeanor, not a felony. If convicted, each faces up to a year in jail and a $4,000 fine.

Mitchell remarked to X, "Defense attorneys and Houston police say it will be tough for the defendants to get a fair trial now that this tape is out there, and they are blaming you specifically for putting this tape out there."

"I believe the people have a constitutional right to see the videotape," X replied. "These are public servants in uniform, caught in the public, and this was caught on tape. And to say to the people that you could not see what they're doing in uniform, in the public, is a disgrace and disrespectful to the citizens of Harris County, who have the intelligence and the ability to sit on a jury, look at the facts, put the pretrial publicity to the side and weigh the real information in this case.

"The videotape speaks for itself. There's not much science to it. So to say that a jury can't make a clear determination of what they're seeing and weigh the facts in this case here in Harris County is an insult to the citizens and the people of Harris County."

But Dick DeGuerin, lawyer for one of the officers seen in the tape, the first one to arrive at the scene, says he's "very concerned" about his client getting a fair trial now that the video is in the public domain, "and all the judges that have seen this have been concerned about it.

"I'm a lawyer. I respect the law. And I think that a case like this ought to be played out in the courts before a fair jury that's not influenced unduly by a video that's now gone viral. It's ugly. It's awful. But if you look at it very carefully, my client, for instance, all he did was he ran up and tried to get this burglar from escaping and also tried to get his hands behind his back so he could be handcuffed. And then he ran off and made another arrest. He was only there less than four seconds."

DeGuerin concedes, "If you look at the tape, you get angry. Anybody gets angry at seeing something like this."

"These officers are paid by the public, with tax dollars," Mitchell pointed out. "Shouldn't the public have the right to see this tape?"

"Yes," DeGuerin responded, "but I don't think they have the right to see it right away. When you balance two constitutional rights, the right to a fair trial, and the right -- the first amendment right of free speech, any time you have to balance one constitutional right against another, there has to be some compromise. The only compromise that all of the courts that looked at this said was, wait until the proper time to release the tape."

Mitchell noted that Quannel X has been "applauded by the folks in your community for getting this tape into the public light. However there are people out there, I understand you received death threats, as well. Why do you think there are people angry about this?"

"Because," X said, "many in the black community have always said that these beatings were taking place. Many African-American men make these allegations weekly in our community (about) the Houston Police Department. But this is the first time that we've ever captured one on videotape. And then, when the mayor herself publicly stated that I should be prosecuted for releasing this videotape to the public, that inflamed the community, and inflamed both sides, both police and those who want the police to be punished for this videotape. So I am in total disagreement with the mayor and those who say that the public had no right to see this videotape."