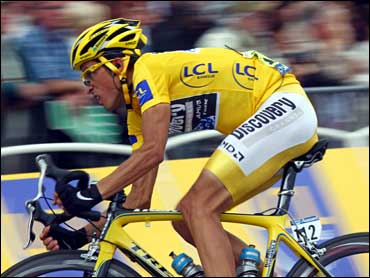 Alberto Contador won the doping-scarred Tour de France on Sunday, a new, young and unlikely winner for the three-week race shaken to its core by scandals.

The 24-year-old rider for the American Discovery Channel team was the youngest champion since Jan Ullrich of Germany in 1997. He also was the first Spaniard to win the crown since the last of Miguel Indurain's five titles in 1995.

His margin of victory — just 23 seconds ahead of Cadel Evans of Australia — was the second-narrowest in the Tour's 104-year history, after 2,200 miles of racing through Britain, Belgium, Spain and France.

"It's an extraordinary joy," said Contador, who kissed his winner's yellow jersey on the podium and thrust his arms ecstatically, the Arc de Triomphe in the background. On the Discovery team bus, staffers uncorked champagne.

Contador, speaking through a translator, called his victory a "dream come true." In 2004, he suffered a massive blood clot in his brain. While in the hospital, Contador drew inspiration from a book about Armstrong, who survived testicular cancer that had spread to his lungs and brain.

Asked on French television about his brain surgery, Contador took off his helmet and showed a large scar running down the side of his head.

"It really marked me for life," Contador said, "but allowed me to better savor this moment."

Contador had seemed destined for second place until the Tour was hit by a bombshell just five days from the finish: the ouster of race leader Michael Rasmussen. His Rabobank team accused the Dane of having lied about his whereabouts before the Tour to evade doping controls.

Rasmussen's departure catapulted Contador into the race lead, Evans of Predictor-Lotto to the runner-up spot and Leipheimer to third. Those standings held through the closing four days — including a thrilling time trial Saturday that Leipheimer won and the 91-mile final ride Sunday to Paris' fan-lined Champs-Elysees from Marcoussis. The stage was won by Daniele Bennati of Italy.

Contador high-fived and hugged his teammates after crossing the line. His original goal was to take the white jersey for the best young rider. In the end, he got both white and yellow jerseys.

Contador was a new star for a race searching for a successor to Armstrong, who retired in 2005, and which is struggling to repair its credibility after two straight years marred by doping.

The 2006 winner, Floyd Landis, did not defend his crown because of doping charges hanging over him. This Tour turned into a circus after it emerged that Rasmussen was competing despite missing doping controls in May and June, and after Kazakh star Alexandre Vinokourov — a pre-race favorite — and Cristian Moreni of Italy failed doping tests. They and their teams left the race, and police raided their hotels, searching for doping products.

Instead of putting the doping cloud left by Landis behind them, Tour organizers again found themselves having to contend daily with the issue. The feel-good factor generated by the race's July 7 start in London, England — watched by millions of fans — quickly faded.

A split emerged as Tour organizers blamed the sport's governing body, the UCI, for not telling them that Rasmussen had missed doping tests. The organizers said they would have prevented him from taking the start had they known. Some newspapers in France declared the Tour dead and said that it should be suspended until the sport cleans up.

The first week of the Tour's 94th edition was dominated by sprinters and marked by crashes in the pack. Fabian Cancellara of Switzerland took the lead on the first day and wore the yellow jersey for the first week. The doping demon quickly returned.

First came news that Patrik Sinkewitz of Germany tested positive for the male hormone testosterone in a sample taken in June while he was training.

Then, over 48 dramatic hours in the last week, came the successive punches of Vinokourov's test for a banned blood transfusion, Moreni's positive test for testosterone and Rasmussen's ouster — a race-changing decision that emerged in the dead of night.

On Rasmussen's last day of racing before he was sent home, riders from French and German teams refused to ride off with him at the start, protesting all the scandals.

Tour officials have been looking to the younger generation in the hope these riders have been less influenced by the doping rife in the late 1990s. Riders in their 20s — not in their 30s like Vinokourov and Rasmussen — swept the Tour's top honors.

The winner of the polka-dot jersey given to the top mountain rider was Juan Mauricio Soler, a 24-year-old Colombian competing in his first Tour.

Tom Boonen of Belgium, 28, earned his first green jersey as the best sprinter in four Tour appearances. Bennati, who also won a stage Thursday, is 26. He said he wept after winning the sprint on the Champs-Elysees.