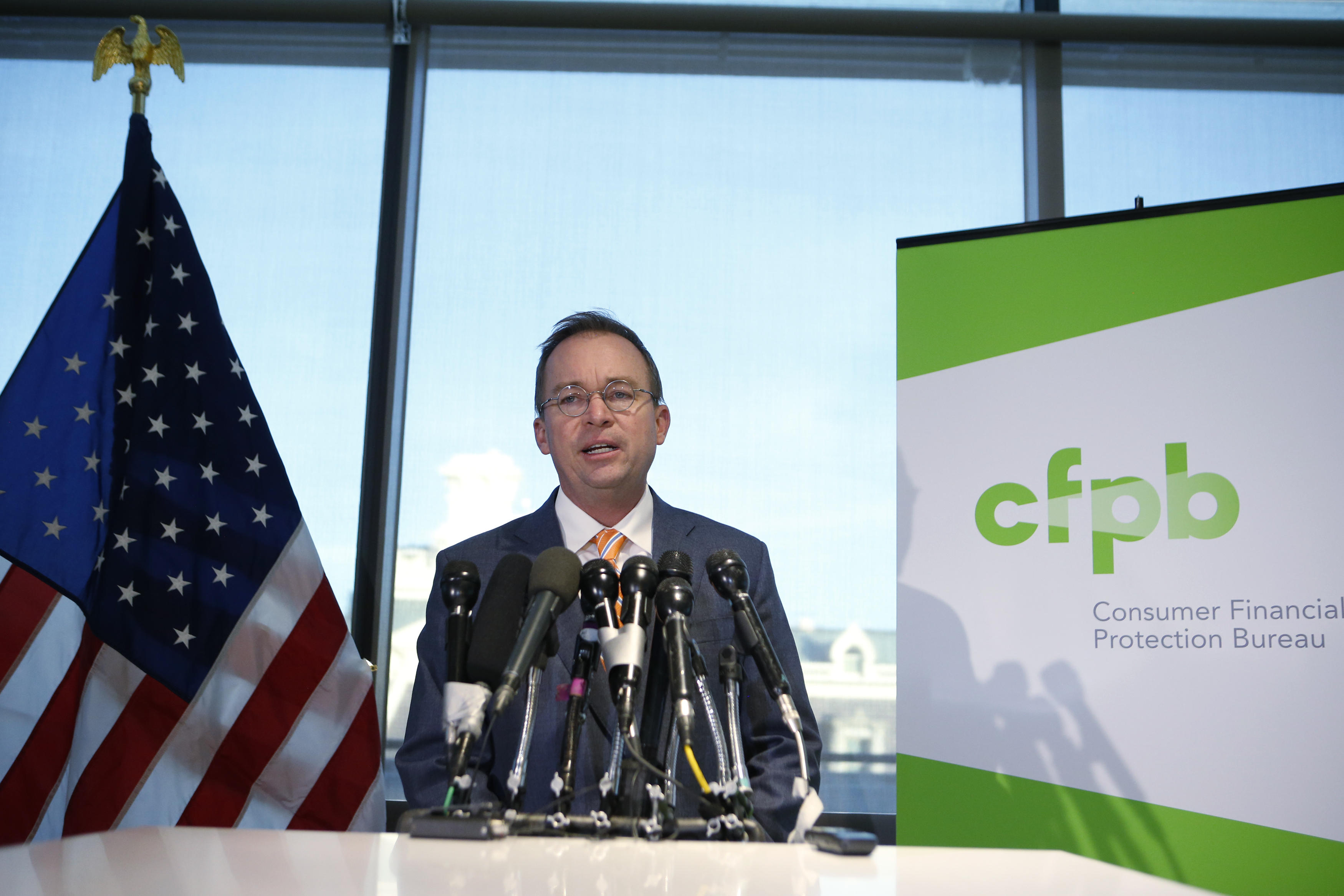 In the 135 days since the Trump administration took control of the nation's consumer watchdog agency, it has not recorded a single enforcement action against banks, credit card companies, debt collectors or any finance companies whatsoever.

That's likely no fluke: Mick Mulvaney, appointed acting director of the Consumer Financial Protection Bureau in late November, promised to shrink the bureau's mandate and take a much softer approach to enforcement, and records reviewed by The Associated Press indicate he has kept his word.

A review of a CFPB database obtained by the AP through a Freedom of Information request shows that the bureau issued an average of two to four enforcement actions a month under former Director Richard Cordray, President Obama's appointee. But the database shows zero enforcement actions have been taken since Nov. 21, 2017, three days before Cordray resigned.

Before Mulvaney, the bureau used enforcement actions to extract billions of dollars in relief for consumers from financial companies and to stop companies from doing harm. Bank of America was ordered to return $727 million to consumers for deceptive credit card practices in 2015 — the largest award in the bureau's history — but the CFPB has issued dozens of smaller actions to get relief for student borrowers, victims of debt collection companies and bank customers.

In the roughly seven years it has been in existence, the bureau has returned $3.97 billion in cash back to American consumers through enforcement actions and an additional $7.93 billion in other types of relief, such as lower loan balances or debt relief, based on the CFPB's records. The bureau estimates roughly one of every 10 Americans has received some sort of reimbursement or relief due to the bureau's enforcement work since it was created.

Despite that direct relief to consumers, Republicans — including Mulvaney when he was representing South Carolina in Congress — accused the bureau of overreach. Mulvaney once called the bureau a "sick, sad joke" of an agency.

Bureau watchers on both sides of the issue say that they don't believe enforcement actions have stopped entirely, and supervision and investigations at the agency are still ongoing. In a statement, the CFPB said the slowdown is tied to a new administration taking over the bureau, adding that "it is our job to enforce the law, and we take it very seriously."

"Assessing the legal risks of all pending enforcement actions is a critical part of the transition process and standard procedure for new leadership at enforcement agencies such as the Bureau. That review continues alongside the agency's ongoing law enforcement work," the statement said.

"Enforcement is very important," said Lauren Saunders, associate director at the National Consumer Law Center, a consumer advocacy organization and a critic of Mulvaney. "If a company violates the law, it needs to be held accountable and called out instead of being quietly admonished through supervision."

The bureau effectively has two main avenues it can use to check wrongdoing at banks and other financial companies.

One is supervision, which is typically confidential and more routine. The CFPB has full-time inspectors inside most of the nation's largest banks who, when they see something that may not be illegal but still raises concerns, can speak privately with bank management. If an issue is more substantial, like a potential breach of consumer protection laws, the bureau can begin an investigation that can culminate in an enforcement order, which is basically a court order directing a company to stop illegal behavior and often carries a fine.

"Enforcement is one of the most important parts of CFPB, because of the signals it is able to send to markets," Saunders said.

Whether or not enforcement has been slowed by the change in management, Mulvaney repeatedly has said he wants to significantly curtail the bureau's operations, and the slowing of enforcement would be part of that.

"I made it clear that the Bureau will continue to execute the law, but will no longer go beyond its statutory mandate," Mulvaney said in his semi-annual report to Congress. His report also called for Congress to pass laws further curtailing the bureau's authority.

Mulvaney will appear in front of Congress on Wednesday and Thursday to discuss that report, and enforcement is expected to come up in questioning.

"My sense is things are moving forward in some way, but much more slowly than what was the historic pace of enforcement work," said Joanna Pearl, legal director at the recently created Public Rights Project, who was chief of staff of the CFPB's Office of Enforcement until January.