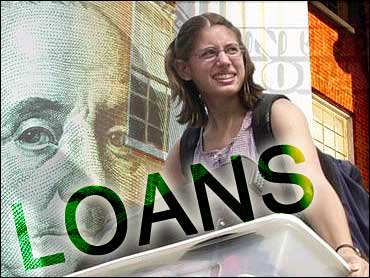 Nobody likes to talk about repaying loans. But if you borrowed money to pay for college, you can make the repayment process a little easier by consolidating your loans.

Students and their parents who pay for college with the help of loans do not receive just one lump sum loan. Instead, they receive one or two separate loans each semester of school. And the loans aren't necessarily all from the same lender. So when it comes time to pay the loans, grads are writing several different checks to different lenders at once.

Consolidating means combining all of these loans into one giant loan. Martin says an obvious benefit of consolidating is convenience. But even better, you consolidate at a fixed interest rate. Individual student loans have variable rates.

The best news of all: Rates are set to fall to their lowest levels in years on July 1. Martin says if you've been thinking about consolidating, don't delay. Rates won't get much better than they are now. Additionally, the U.S. House of Representatives has proposed a bill that would stop the practice of consolidating at fixed rates. After 2006, even consolidated loans would have variable interest rates.

Unfortunately, a study by Collegiate Funding Services (a major student lender) found that more than half of recent grads don't even know that they can consolidate loans.

Martin says there's no question that consolidating is a smart move for recent graduates who are traditionally short on cash. At a time in your life when every dollar counts, the money you save can dramatically help your monthly cash flow. Even if you're not short on cash, the money you save can be used to pay off credit card debt, save for a home, or begin building a retirement nest egg.

Consolidating will give you, by far, the cheapest money you can ever borrow. Take a look at where rates will be as of July 1:

Anyone with an undergraduate or graduate student loan can consolidate, but not everyone should.

Martin's Reasons Not To Consolidate

Even if you just have a few months or years of payments left on your loans, you can still save by consolidating. Because it doesn't cost anything to consolidate, you have nothing to lose.

Also, you can consolidate even if you just have one loan. This allows you to lock in a low interest rate.

Tons of companies are in the loan consolidation business. But if you only have one loan, you have to go through that lender to consolidate. If you have multiple loans from multiple lenders, you have more flexibility.

Everyone in the business should be offering you the same interest rate because the federal government sets it. Also, no one should be charging you a fee, checking your credit or requiring collateral. If they do, find another lender!

So, you need to be looking for a lender offering good discounts. Some providers will knock .25 off your rate if you agree to have loan payments automatically deducted from your bank account. Others reward you with a one-percent discount after 36 months of on-time payments or a cash rebate.

The next big question to consider when consolidating your loans is how long you should take to repay them. You have four loan repayment options. They are:

The longer you take to pay your loan, the more interest you pay. But, according to Martin, the interest is so low that it makes sense to take advantage of lower monthly payments if you use the money you're saving to pay off high-interest debt. For instance, you should certainly pay off a credit card debt which carries 14-percent interest before you worry about your student loan which costs three or four percent.