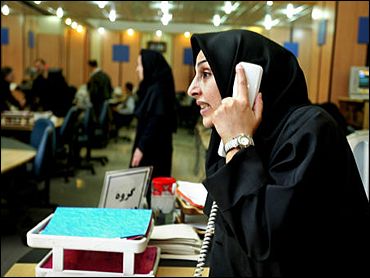 Conservatives formally reclaimed control of parliament Monday following disputed elections boycotted by reformists who called the vote a "historical fiasco" in which Iranians had no free choice.

Candidates considered loyal to Iran's Islamic rulers took at least 149 places in the 290-seat parliament, which has been controlled by pro-reform lawmakers since their landslide win four years ago.

That puts conservatives past the 146-seat benchmark for a clear majority. Reformers and self-described independents had taken about 65 seats, according to Interior Ministry figures. The final count is expected Tuesday.

The conservative victory was already expected even before Friday's elections. Reformers widely boycotted the vote after more than 2,400 liberal candidates were banned from running by the hard-line Guardian Council.

The nationwide turnout stood at slightly more than 50 percent. But in the capital, Tehran, just 33 percent of voters turned out, the Interior Ministry said. It was a noticeable drop from the 67.2 percent in the last parliament elections in 2000.

"Victory in a competition without rivals is not epic but a historical fiasco," Rasoul Mehrparvar said during an open session of parliament broadcast live on state-run radio.

Mehrparvar, one of the lawmakers barred from seeking re-election, said hard-liners must await God's punishment.

"I hope you will be questioned in the Judgment Day before God because you are not responsive to the people in this world," he said, addressing the head of the hard-line Guardian Council.

A drop in voter turnout was seen by reformists as public backing for their drive to weaken the almost limitless controls of the theocracy.

Despite the lower numbers, Iran's supreme leader Ayatollah Ali Khamenei, who has the final say on all state matters, welcomed the turnout as a "national and an Islamic epic in the true meaning."

But reformers pointed out that voters' rights had been violated because they could only vote for candidates that had already been chosen by the Guardian Council.

"Restricting people's choice and imposing certain candidates on them is contrary to the constitution," said Hossein Ansarirad, a cleric and reformist lawmaker. "... Through disqualifying more than 2,000 well-known candidates, the Guardian Council prevented candidates from being chosen and the nation from choosing freely. This is a violation of people's sovereignty."

Haqiqatjou is one of about 130 reformist lawmakers who resigned earlier this month to protest the mass disqualification of liberal candidates.

Resignations must be debated one by one in the parliament and need a majority vote to take effect. Haqiqatjou's is the first to be accepted.

The shift of control in parliament expands the influence of theocracy and denies liberals an important forum to challenge the non-elected clerical establishment that has final say in almost all affairs.

In Tehran, previously a liberal stronghold, the new conservative group "Developers of Islamic Iran" was firmly in the lead. The group is led by Gholamali Haddadadel, a conservative figure with family relationship to Khamenei.