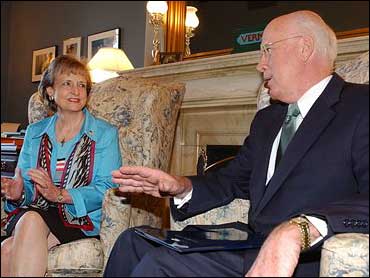 "There are a lot more people — men, women and minorities — that are more qualified in my opinion by their experience than she is," said Lott, R-Miss., formerly the Senate Majority leader.

Lott said it's not enough for the president to say "trust me," when it comes to the Supreme Court.

"I don't just automatically salute or take a deep bow anytime a nominee is sent up," Lott told MSNBC. "I have to find out who these people are, and right now, I'm not satisfied with what I know."

Other conservatives offered Miers their support.

"President Bush has an excellent record of appointing judges who recognize the proper role of the courts, which is to interpret the law according to its actual text, and not to legislate from the bench," said David N. O'Steen, executive director of the National Right to Life Committee. "We believe that Harriet Miers is another nominee who will abide by the text and history of the Constitution."

GOP Sen. John Cornyn, a fellow Texan, a former judge and a member of the Senate Judiciary Committee, also came out for Miers after meeting with her Wednesday morning. Cornyn said he believes her Senate Judiciary confirmation hearing could begin as early as Nov. 7.

"I don't need to reserve judgment because I know she's the right person for the job now," said Cornyn, who has known Miers for 15 years.

But Cornyn acknowledged that Miers faces problems from some conservatives. "The president in a sense has disarmed some of his critics, but also made some of his supporters nervous by this nomination," Cornyn said.

Conservatives in some cases are expressing outright opposition, some are in wait-and-see mode and others are silent, all bad signs for a Bush administration used to having the full backing of all wings of the GOP when it takes on the Senate's minority Democrats over judicial selection.

CBS News correspondent Gloria Borger reports that conservatives are upset because they wanted an ideological battle.

"They wanted a symbol. They wanted someone who openly supported their views of the Supreme Court," Borger said. "But they know nothing about her judicial philosophy."

Democrats are mostly holding their fire, though Sen. Patrick Leahy, the ranking Democrat on the Judiciary Committee, said Wednesday that too little is known about Miers for the president to call her the best qualified person for the job.

"What's interesting here is how remarkably little is known about this nomination, and we're hearing that from both sides of the aisle," Leahy, D-Vt., said after meeting with Miers on Capitol Hill. "The whole Senate needs to know more about the nominee. The american people have to know more about her."

While insisting that he doesn't recall ever talking to Miers about abortion, he pointedly said, "I know her heart."

Mr. Bush, who emphasized that he's a proud conservative, said he hoped his supporters were listening. "I'm interested in someone who shares my philosophy and will share it 20 years from now," he said.

White House spokesman Scott McClellan on Wednesday said the nomination was only two days old and suggested that support for Miers would grow once senators looked "at her record of accomplishment." He said that while she would answer questions put to her by senators, the White House would not make available "confidential deliberative documents" relating to work she had done for the president.

After a strong push from the president and his White House staff, some conservative groups are coming out in favor of Miers, the White House counsel and longtime Bush friend. "I trust that she will be an excellent addition to the high court and all Americans will be proud of her," said Roberta Combs, president of the Christian Coalition.

And one of the Senate's senior conservatives, Orrin Hatch, R-Utah, was one of the first senators to announce his support for Miers.

"A lot of my fellow conservatives are concerned, but they don't know her as I do," said Hatch, a former chairman of the Senate Judiciary Committee. "She's going to basically do what the president thinks she should, and that is be a strict constructionist" when it comes to deciding constitutional issues.

"There's precious little to go on and a deep concern that this would be a Souter-type candidate," Brownback said, referring to Supreme Court Justice David Souter, a little-known judge nominated for the court by the first President Bush who later turned out to be liberal on the bench.

"The circumstances seem to be very similar," said Brownback, who will meet with Miers on Thursday. "Not much track record, people vouching for her, yet indications of a different thought pattern earlier in life."