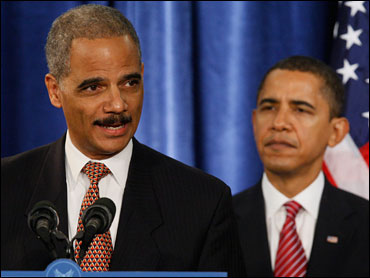 "Though this nation has proudly thought of itself as an ethnic melting pot, in things racial we have always been and continue to be, in too many ways, essentially a nation of cowards,'' Holder said at the Justice Department. "It is an issue we have never been at ease with and given our nation's history this is in some ways understandable."

"Eric Holder in his speech yesterday calling this nation still a nation of cowards on the issue of race – this country that has shed more blood than any nation in the history of the earth to wipe out slavery and discrimination against people of color around the world," he said. "It is an inexcusable statement and yet there they are the drive bys are right there defending it an explaining what he meant by it."

The Chicago Tribune, meanwhile, reports that Joe Hicks, a black Republican and the former executive director of the Los Angeles City Human Relations Commission, chastised Holder for his comments, calling them incendiary.

"Here's the first black attorney general appointed by the first black American president and he's espousing views that appear to be almost ultra-left in their approach to race in America, that blacks are victims and whites are intolerant and accepting of quasi-racist views,'' Hicks said.

Conservative syndicated columnist Michelle Malkin wrote in her column: "Funny. When I think of racial cowards, I think of Barack Obama at Jeremiah Wright's church, sitting there week after week, year after year, saying nothing about the separatist demagoguery echoing from the pulpit to the pews."

"I find Eric Holder's comments on race both hackneyed and reprehensible," a post by Jonah Goldberg in the conservative National Review reads.

"First, I think this is nonsense as we talk about race a great, great, great deal in this country. Endless courses in colleges and universities, chapters in high school textbooks, movies, documentaries, after-school-specials and so on are devoted to discussing race. We even have something called "Black History Month" — the occasion for Holder's remarks to begin with — when America is supposed to spend a month talking about the black experience," Goldberg wrote.

"Maybe if my grandfather was a slave I would be a little indignant about it," one man said. "But I just think its time to let go."

"Most white people I know have black friends," another complained. "How many white friends do black people you know have? That's the problem."