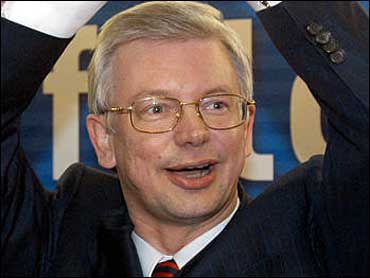 Chancellor Gerhard Schroeder's party suffered a crushing defeat in two German state elections Sunday, reflecting a loss of confidence in his government's economic course despite broad support for his anti-war stand on Iraq.

In final results, the Christian Democrats grabbed 48 percent of the vote in Lower Saxony from 36 percent in the last election five years ago. The Social Democrats were at 33 percent, down from nearly 48 percent last time.

Sunday's result also increased the conservatives' legislative leverage by increasing their majority in the upper house of parliament, where the states are represented.

Though the defeat turned heavily on dissatisfaction with tax hikes and Germany's grim economic picture, it also demonstrated the limits of the strident anti-war stance that helped Schroeder narrowly win re-election in September.

The conservative party's leader, Angela Merkel, expressed satisfaction that "people in Germany refused to be seduced a second time by a mood of fear" she accused Schroeder of exploiting at the expense of the country's reliability as a U.S. ally.

"This is an important signal to the European allies and to the American government," Merkel told The Associated Press.

"I think much is at stake for German foreign policy. I myself represent a policy of our Christian Democrats in which we hold important friendship with the United States not just out of gratitude but because of the long-term security of Europe and Germany."

Schroeder has ruled out German participation in a military attack against Iraq and campaigned saying Germany would refuse to back a war authorization in the U.N. Security Council, which it is chairing in February.

Schroeder's stance will be tested this week when Secretary of State Colin Powell offers new evidence of Iraqi weapons programs. Backed by polls showing that most Germans oppose a war, the Social Democrats insisted Schroeder would stick to his defiance.

There was no immediate comment from Schroeder, who spent Sunday with his wife in the Lower Saxony capital of Hanover, where he governed for more than eight years before becoming chancellor.

But the conservatives, who said they avoided raising the Iraq issue during the campaign to avoid being branded warmongers, signaled that they now intend to sharpen the tone of Germany's debate over Iraq.

"Germany is bound to two important lessons from World War II. 'No war ever again' is an important lesson," Merkel said. "But it's just as important for Germany never again to act alone. The Christian Democrats will be lending a voice to that stance. I am convinced that a majority of Germans also see it that way."