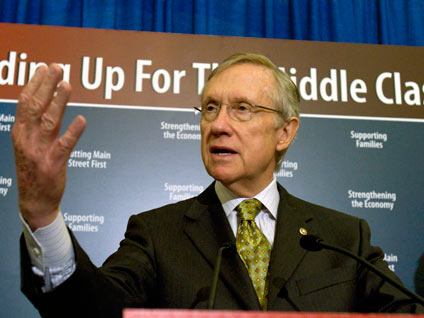 Senate Majority Leader Harry Reid on Tuesday made an appeal to Latino voters that conservatives are saying smacks of racial insensitivity.

"I don't know how anyone of Hispanic heritage could be a Republican, OK," Reid said. "Do I need to say more?"

Conservatives are pushing back on that remark, at a time when immigration reform has become an increasingly divisive issue. It could be a particularly important issue in Nevada, where Hispanics make up about 25 percent of the state population and accounted for 15 percent of the electorate in 2008, according to the Review-Journal.

"Hispanic voters don't have a 'herd mentality,'" he said. "They have shown that their vote cannot be taken for granted by any party and that they will support candidates who will defend the principles they believe in -- the sanctity of the family, the dignity of the human person, hard work and entrepreneurship, among others."

Immigration reform was pushed to the forefront of national debate in the spring, when Arizona added a law to the books requiring police officers to check the immigration status of suspected illegal immigrants during any lawful stop. Republicans across the country have expressed support for the measure, which polls show is supported by most Americans. A district judge in July put the most controversial aspects of the Arizona immigration law on hold.

In April, Reid promised Hispanic activists that he would deliver comprehensive immigration reform this year, the Review-Journal points out, and said there would be "no excuses" for failure. The push for immigration reform has lost steam in Washington, however, as Republicans who once took a moderate stance on the issue -- such as Sens. Lindsey Graham and John McCain -- have pulled back on their support. Now, Republicans are pushing even further to the right on the issue, calling for a reconsideration of the 14th Amendment, which guarantees citizenship for anyone born in the United States, even if their parents are in the country illegally.

Angle also opposes the DREAM Act, a measure Reid is pushing that would provide a pathway to citizenship for undocumented students who came to the United States as minors and meet other certain criteria. Angle said "amnesty" is "generally cloaked within those proposals," the Sun reports.

Angle's deputy campaign manager Jordan Gehrke remarked that Reid's most recent comments show that if he is re-elected, there will be "more insensitive racial comments, more gaffes, more lame attempts to distract from what he has done to destroy the Nevada economy," the Weekly Standard reports.

Gehrke alluded to past comments Reid made that President Obama was a "light-skinned" African American.

Update: The Reid campaign issued a statement in response to the criticism saying that the senator enjoys the support of many Hispanic Republicans and appreciates their support. It also clarified Reid's remarks.

"Sen. Reid's contention was simply that he doesn't understand how anyone, Hispanic or otherwise, would vote for Republican candidates because they oppose saving teachers' jobs, oppose job-creating tax incentives for small businesses, oppose investments in job-creating clean energy projects, and oppose the help for struggling, unemployed Nevadans to put food on the table and stay in their homes," the statement said.