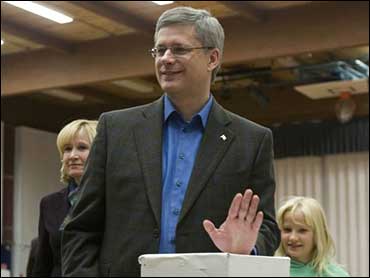 Canadian Prime Minister Stephen Harper, the first major world leader to face voters since the global financial meltdown, led his Conservative Party to victory in Tuesday's election but was forecast to fall short of a majority in Parliament.

The election agency reported on its Web site that the Conservatives had won or were leading in races for 143 of Parliament's 308 seats, an improvement over the 127 seats the party had in the previous Parliament.

But, based on results obtained directly from election officials, Canadian Broadcasting Corp. predicted the Conservative Party would not win the 155 seats needed to govern on its own. That would force it to again rely on opposition support to pass budgets and legislation - as it has had to since a 2006 election victory.

Harper had called elections early in hopes of getting his party a majority, but the Conservatives sought to put a good face on the results, pointing to their increased number of seats.

"Our party is bigger, our support base is broader and more and more Canadians are finding a home in the Conservative Party of Canada," Harper said early Wednesday.

"We have shown that minority government can work and at this time of global economic instability we owe it to Canadians to demonstrate this once again," he added.

The Liberal Party, long Canada's top party, suffered a severe drubbing, dropping about two dozen seats from 95 in the previous Parliament, according to the election agency. Bloc Quebecois led for about 50 seats, the New Democrats just under 40 and independent candidates 2.

"I have talked to Prime Minister Harper to offer him congratulations and my full cooperation in these difficult economic times," Dion said.

The party winning the most seats generally forms the government, with its leader becoming prime minister. The opposition parties could unite and topple Harper if they won enough seats for a majority, but analysts said that was unlikely because the parties have no tradition of forming such coalitions.

The opposition Liberals have typically been the party in power, forming the government for most of Canada's 141 years. But the left-of-center vote was divided among four parties, giving an edge to the Conservatives.

Dion's campaign was hindered by his unpopular plan to tax all fossil fuels except gasoline and by perceptions he is a weak leader. A former professor from French-speaking Quebec, Dion also suffered in other regions because he frequently mangles English grammar and his accent makes him hard to understand.

Dion said Canadians have asked him to be their official opposition leader, a signal that he's not ready to step down at this point.

If Dion was ousted as leader after a loss, he would be just the second Liberal leader to fail to become Canada's prime minister. The only other was Edward Blake, who led the party to defeat in the 1882 and 1887 elections.

Analysts said Harper wanted the election before the economy got worse and ahead of the U.S. presidential election in November, which could put a Democrat in the White House and encourage Canadians to choose a more liberal government.

At the campaign's start, polls suggested Harper would increase the Conservative bloc in Parliament above the 155-seat threshold needed to form a majority government.

Then the global credit crisis worsened and many Canadians complained Harper was slow to react. He hurt himself by saying during a debate that Canadians were not concerned about jobs or mortgages. A few days later, he said stocks were cheap - just before Canada's main stock exchange had its worst week in almost 70 years.

Harper later said he knows Canadians are worried and stressed that Canada's economic and fiscal performance contrasts to the more dire situation in the United States.

On Wednesday, he said he will "hold out a hand to all members of all parties asking them to join together to protect the economy and weather this world financial crisis."

"I want to ensure Canadians that working together we will weather this storm and we will position our economy stronger than ever before," Harper said.

Opponents sought to paint Harper as a right-winger who would seek to reshape Canada like a U.S.-style Republican and sought to tie him to the unpopular President Bush.

Since becoming prime minister in 2006, Harper extended Canada's military mission in Afghanistan and pulled Canada out of the Kyoto Protocol, which commits industrialized nations to reduce greenhouse gas emissions.

Harper supported the U.S.-led war in Iraq when he was in the opposition in 2003. Dion was part of the Liberal government that opposed the war.