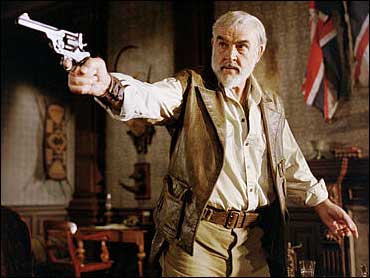 The next "Indiana Jones" flick will not be another father-son affair. Sean Connery says he will not return to play dad to Harrison Ford's globe-trotting adventurer Indy.

Connery played Indy's father in 1989's "Indiana Jones and the Last Crusade," the third installment of the franchise directed by Steven Spielberg and produced by George Lucas.

"I get asked the question so often, I thought it best to make an announcement," Connery, 76, said in a statement posted Thursday on Lucasfilm's "Indiana Jones" Web site. "I thought long and hard about it, and if anything could have pulled me out of retirement it would have been an 'Indiana Jones' film."

"I love working with Steven and George, and it goes without saying that it is an honor to have Harrison as my son," he said.

"But in the end, retirement is just too damned much fun."

The fourth "Indiana Jones" film, not yet titled, is again directed by Spielberg and produced by Lucas. Shooting begins this month, and the movie is due out May 22, 2008.

Lucasfilm also announced Thursday that Cate Blanchett, John Hurt and Ray Winstone will be joining the cast, which along with Ford, includes Shia LaBeouf.

Connery — who played the bookish Henry Jones Sr. in "The Last Crusade" and affectionately called his son "Junior" — did have some words for the 64-year-old Ford.

"I do, however, have one bit of advice for Junior: Demand that the critters be digital, the cliffs be low, and for goodness sake keep that whip by your side at all times in case you need to escape from the stunt coordinator!" Connery said. "This is a remarkable cast, and I can only say, 'Break a leg, everyone.' "