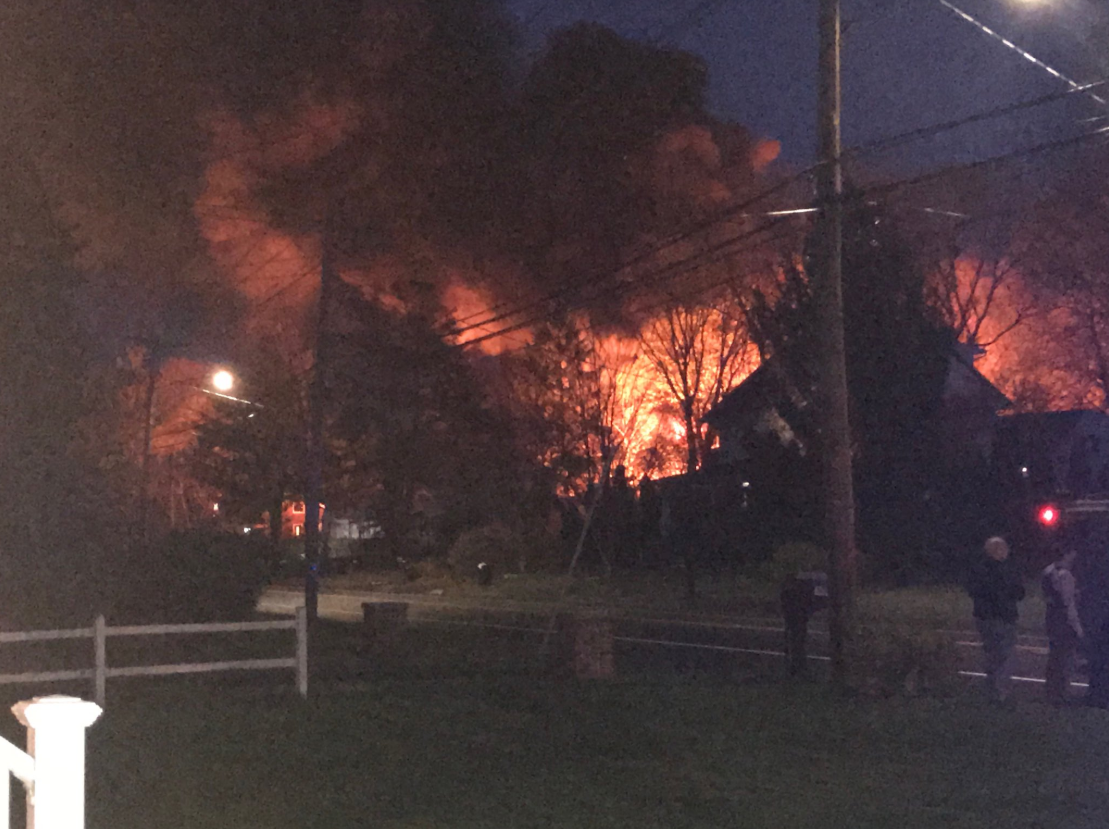 NORTH HAVEN, Conn. -- A fiery explosion rocked a Connecticut town while police were negotiating with a man who had taken his wife hostage, leaving up to eight officers injured, officials said. The officers suffered non-life-threatening injuries in the blast at a barn behind the couple's North Haven home Wednesday night.

She said she had escaped from the home after being held hostage by her husband for 3 days.

He then barricaded himself in the barn, WFSB-TV says. That was followed by the explosion, the station says.

"The suspect is not in custody at this time," said trooper Kelly Grant, Connecticut State Police. "They are still attempting to locate that suspect. They have asked the residents right in this general vicinity to shelter in place while they conducted this investigation.

The area surrounding the property has been blocked off by rows of cruisers.

Neighbors were told to stay in their homes with their lights off. Police asked people to avoid the area.

Police were heard continuing to try to coax the man out even after the explosion though it wasn't clear he was there.

"It's quite surprising," Freda said. "This is a quiet residential neighborhood. It's been a very emotional scene."

There was no word on what caused the blast.

The blaze was still burning early Thursday, said fire officials, adding that power was out to the area and a local firehouse had been set up as a "refuge" for affected residents.

Residents near the home said on the police department's Facebook page that they heard the explosion and felt their own homes shake. Additional police rushed to the scene as the fire raged, and sounds of smaller explosions also were heard.

North Haven resident Joan Mazurek, 76, a retired accountant, heard what she thought was a train at her home about a mile away from the scene. It was the explosion.

"Then we heard all the, oh my God, all the ambulances and fire engines. The noise from all the emergency vehicles was unbelievable," she said. "It's a shock. Nothing ever happens like this in North Haven."

State police said they were assisting North Haven police with the investigation. The Bureau of Alcohol, Tobacco, Firearms and Explosives also responded to the scene.

North Haven is located just outside of New Haven, home to Yale University.