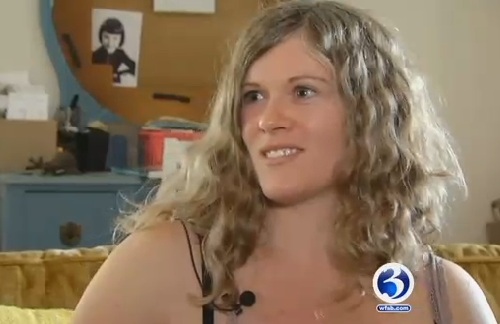 TORRINGTON, Conn. -- A Connecticut woman who was berated by a man who called her "disgusting" for breastfeeding her baby in public at a Target store is thanking customers and employees who defended her.

Jessie Maher captured part of the confrontation Monday in the cafe of a store in Torrington on video and posted it to Facebook. The video was viewed nearly 3 million times and shared nearly 43,000 times by Tuesday afternoon.

Maher told CBS affiliate WFSB that the man in the video told her that what she was doing was disgusting.

"I am feeding my baby, and I have the right to do it here," Maher told the man.

The exchanges became heated between Maher and the man.

"Because I am feeding my baby, this man is going crazy and I'm shaking," Maher said in the video.

The man demanded a refund from the staff because Maher was breastfeeding in public. An unidentified woman came to her aide along with the Target staff.

"You shouldn't be ashamed of feeding your baby. He can go the other way. This is a beautiful moment. If he doesn't like it he can go," the unidentified woman is heard saying in the video. "Then don't look, okay? I'm here to protect her."

Two male Target employees then confront the man and escort him away from the cafe.

"The amount of people coming at me to defend me was amazing," Maher told WFSB. "Everyone that was right in that area was there for me defending me, so it felt really good."

Maher said the Target employees told her she was free to breastfeed her baby anywhere in the store. WFSB reached out to Target media relations and they confirm they allow nursing inside their store.

"At Target, we want all of our guests to feel comfortable shopping with us. Our breastfeeding policy, which applies to all stores, is just one of the ways in which we support our guests. Guests who choose to breastfeed in public areas of the store are welcome to do so without being made to feel uncomfortable," Target said in a statement on Monday.

Target said customers can also use fitting rooms to breastfeed their babies.

"For this particular incident, the team members at the Torrington store were simply helping to ensure this guest and others had a great experience," Target told WFSB.