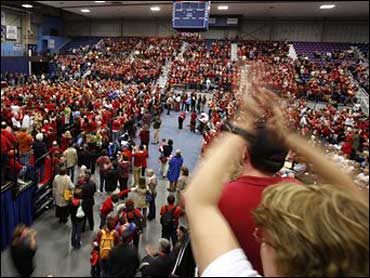 A decade-long battle for marriage equality in Connecticut ended late Wednesday when the General Assembly voted to update the state's marriage laws to conform with a landmark court ruling allowing gay and lesbian couples to tie the knot.

"It feels so good. It really does feel like the book is closing," said Anne Stanback, president of Love Makes a Family, a gay-rights group that has led the fight for same-sex marriage in the state.

A spokesman for Gov. M. Jodi Rell said she will sign the bill, which passed 28-7 in the Senate and 100-44 in the House of Representatives, into law. While Rell, a Republican, signed the state's 2005 civil unions law, she has said she believes that marriage should be between a man and a woman.

The bill comes six months after the State Supreme Court ruled 4-3 that same-sex couples have the right to wed in Connecticut, rather than accept the civil union law designed to give them the same rights as married couples.

It redefines marriage in Connecticut as the legal union of two people. State law previously defined marriage as the union of a man and a woman.

Even if the bill hadn't passed, same-sex marriage would still be the law in Connecticut because of the court ruling. Proponents say the legislation is needed to phase out civil unions and make sure same-sex couples conform to the state's marriage laws.

The Connecticut bill transforms civil unions into marriages as of Oct. 1, 2010, unless they've been annulled or dissolved. Many couples with civil unions already have sought marriage licenses since the court decision.

In an effort to appease some gay marriage foes, lawmakers amended the bill to show they want to protect religious liberties. For example, it says religious organizations and associations are not required to provide services, goods or facilities for same-sex wedding ceremonies.

"We wanted to make it completely clear that the state of Connecticut fully embraces not only the rights of same-sex couples to marry, but we fully embrace the rights and protections afforded by the First Amendment of the United States Constitution and the Connecticut Constitution to the free exercise of religion," said Sen. Andrew McDonald, D-Stamford, a gay marriage proponent.

Peter Wolfgang, executive director of the Family Institute of Connecticut, which opposes gay marriage, considered the amendment "a significant improvement" because the original bill did not include any protections for religious groups such as the Knights of Columbus, which often rents out halls for weddings.

"It made a bad bill better," he said.

Carol Gignac, a 62-year-old Roman Catholic from Bristol, clutched her rosary beads as she watched Wednesday's debate from the Senate gallery. She said she was praying during much of the day for God's mercy on Connecticut.

While resigned to the fact that gay marriage is now the law, Gignac said it bothers her that the court made that decision.

"The sad day was the state Supreme Court changing the thousands-of-years definition of marriage as between one man and one woman, across cultures, across times," said Gignac, who wore a sticker on her lapel that read: "Religious Liberty: Our Freedom First."

Rep. Beth Bye, a West Hartford Democrat who is openly gay and recently married her partner, thanked her colleagues for supporting the bill.

"I'm grateful that this bill provides the respect and dignity that all marriages in Connecticut deserve," said Bye, who received hugs of congratulations after the final tally.

McDonald, who is openly gay, said the language is outdated and offensive to gays, lesbians and bisexuals.