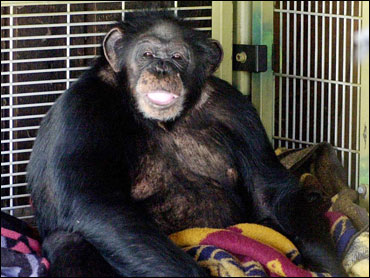 A Connecticut biologist warned state officials nearly five months ago that a 200-pound chimpanzee who mauled a woman last month could seriously hurt someone if he felt threatened, according to a memo released to state lawmakers Friday.

The biologist also said the chimp's owner violated state law, and ended her note with the prophetic warning: "I would like to express the urgency of addressing this issue. It is an accident waiting to happen."

The two-page document was written on Oct. 28, 2008 by an unnamed Department of Environmental Protection biologist and given to senior staff at the agency's Bureau of Natural Resources.

It was discovered in an ongoing internal agency review prompted by the mauling incident.

"The animal has reached adult maturity, is very large, and tremendously strong," the memo says. "I am concerned that if he feels threatened or if someone enters his territory, he could seriously hurt someone."

The biologist said it was unclear whether the chimp's enclosure was strong enough to secure the animal named Travis, owned by Sandra Herold of Stamford and kept at her home.

Charla Nash was critically injured Feb. 16 when she was attacked by the 200-pound chimp. Nash's attorneys say the 55-year-old woman lost her hands, nose, lips and eyelids and may be blind and suffering brain damage after the attack. She is being treated at the Cleveland Clinic.

Earlier this week, Nash's family filed a lawsuit against Herold accusing her of negligence. The suit seeks $50 million in damages.

Dennis Schain, a DEP spokesman, said officials reviewed the memo, but decided it did not present any new, specific information about any violent incidents involving the chimp.

The memo does, however, mention how the chimpanzee had escaped from Herold's car and led police on a chase for hours in downtown Stamford in 2003.

"In hindsight, we certainly wish we acted more aggressively," Schain said Friday. "We just felt hamstrung by the ambiguity in the law and the difficulty of pursuing various options."

A bill before the General Assembly, which would ban the possession of potentially dangerous animals including chimpanzees and other primates, cleared the Environment Committee on a 28-2 vote on Friday. It awaits further action in the House of Representatives.

The biologist's memo was included in a packet of information sent to legislative leaders, urging them to pass the bill.

In the memo, the biologist said Herold's possession of the chimpanzee clearly violated an existing law that prohibits someone from owning a primate that weighs more than 50 pounds at maturity.

The biologist suggested sending a letter to Herold and informing her of the violation and giving her options on how to comply with state law.

The biologist also raised the possibilities of allowing Herold to keep the animal, but in a stronger enclosure; issuing Herold a permit, which the biologist admitted would be "irresponsible"; giving Herold the choice to relocate Travis; and contacting local police to see if a chimp is permitted by local zoning laws.

The memo also suggested having Travis tranquilized and removed from the home, but the biologist said, "This would be extremely traumatic for everyone involved and riddled with problems."

Ultimately, officials "chose not to enter into what we believed would be a battle to take custody of a local celebrity," DEP Commissioner Gina McCarthy said in a letter to legislators.

McCarthy said the memo underscores the need for a clear, new law that would forbid ownership of potentially dangerous animals as pets and impose stiff penalties for those possessing them.