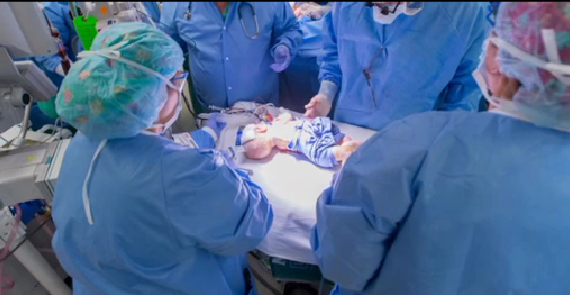 JACKSONVILLE, Fla. -- For the first time in their 5-month-old lives, conjoined twins Carter and Conner squirmed in separate cribs.

The Jacksonville boys, who shared a liver and small intestine, were successfully separated Thursday after a 12-hour operation by three surgeons, five anesthesiologists and 12 other staffers.

"Hours and hours went past and we got a good update and they told us they were separated and I turned about five shades happier," the twins' father, Bryan Mirabal, told CBS Jacksonville affiliate WJAX.

"They were like 'they're separated,' and I was so excited jumping up and down and everyone was bawling their eyes out," the boys' mother, Michelle Brantley, told the station.

The couple, whose lives were upended by the news that their twins were conjoined in the womb, were all smiles following the operation.

"It was so awesome, walking up to the bed for the first time, and then it registered that I was just looking at Carter," Mirabal said. "And then I thought, 'I have another baby over here too!'"

Five months into her pregnancy, Brantley's doctor delivered the news: Her twins were fused at the belly and lower chest.

"It was very overwhelming, upsetting and very sad," she said. "We prayed a lot and had family and support and we got through it."

On the day of Brantley's delivery, reality set in.

"It was like, there they are. It was very scary," Mirabal said.

Soon, doctors told the couple their boys would have a good chance of surviving separation surgery; Connor and Carter shared organs that can be separated.

The boys shared a liver, bile ducts and part of their small intestine. If they shared a heart or brain, fewer options were available, said Dr. Daniel Robie, chief of pediatric general surgery for Nemours Children's Specialty Care at Wolfson Children's Hospital in Jacksonville.

"We separate them and then reconstruct them so that they each have organs that are going to function normally," Robie said.

Still, there were obstacles. The doctors worried about too much blood loss while separating the liver, Robie said.

So the surgeons and their teams spent months preparing. They went through dry runs and created medical illustrations of the conjoined areas for study.

The twins were in critical but stable condition Monday, according to the hospital. They'll be in the hospital for at least another month.

Weary but in good spirits, Brantley and Mirabal say they're starting to think about all the routine things new parents do. They say the ordeal brought them closer together and they are now engaged to be married.

"We are starting to change around the house, getting cribs set up," said Mirabal, 26, who works as a house painter. "We hadn't started setting anything up because of what we were told could happen (in surgery)."

Brantley said they are going to celebrate birthdays and have a party each year to honor the date of the boys' separation.

"I'm keeping some of the conjoined clothes people have made them so I can show it to them when they're older," she said.