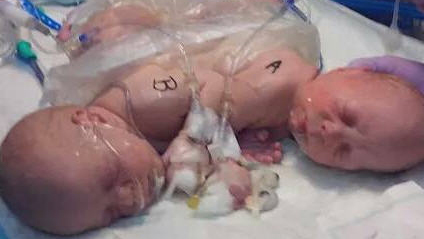 A set of conjoined twin boys, born late Friday, underwent the first of what's likely to be a number of surgeries to repair some damage to organs that are partially exposed. The boys, named Conner and Carter, are joined at the sternum and the abdomen. They are currently recovering from the operation at Wolfson Children's Hospital in Jacksonville, Fla.

After Conner and Carter were born on Friday, doctors did tests and determined the brothers shared only a liver and part of their small intestines. The family said for the time being their doctors plan to hold off on the surgery to separate the boys. They are what's known as omphalopagus twins, joined at the abdomen, which statistically has the highest survival rate since the body can easily regenerate liver tissue on its own.

As of Saturday, the boys were on a respirator, recovering and in relatively stable condition, though the family said Carter has begun to have some heart problems due to an enlarged aorta.

When their mother Michelle Brantley was pregnant, the doctors told her the boys most likely wouldn't survive beyond 32 weeks' gestation, according to the Florida Times Union. She was also informed that babies born with this rare condition have only a 25 percent chance of survival. But her pregnancy was otherwise normal and the expectant mom did not experience any major complications.

Brantley had scheduled a C-section for this week, but late last Friday she went into labor and was taken to the hospital. Conner and Carter were born just before midnight. Carter is 19 inches long and Conner is 18 and a half inches, reported the family on their Facebook page.

"The boys are in stable condition. We have a meeting coming up here very soon with the surgeons and doctors to talk the up coming plans for Carter [and] Conner," they wrote on Facebook. "Please continue to keep praying for our baby boys!"

Conjoined twins are the result of one fertilized egg that divides into two fetuses that fail to fully separate. Conjoined twins are incredibly rare, which is why they tend to make headlines. Approximately one of every 200,000 babies delivered are conjoined twins. Among them, 40 to 60 percent are stillbirth, while only 35 percent survive live past their first day in the world. The overall survival rate of conjoined twins is about 5 to 25 percent.