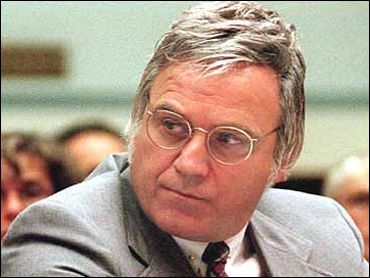 Rep. James A. Traficant Jr., D-Ohio, told jurors at his bribery trial Wednesday that he never coerced bribes or favors and claimed the government was out to get him, partly for his legislative actions involving the Internal Revenue Service.

In the government's opening statement, prosecutor Craig Morford said the evidence will show Traficant "used his position as a congressman to perform and promise to perform official acts and in exchange he received free things."

Morford said that as "the single most powerful government official" in Youngstown, Traficant intervened with government agencies on behalf of local businessmen, who then provided him with a variety of favors.

The first witness, Youngstown lawyer Allen Sinclair, testified Wednesday that he took a $60,000-a-year congressional staff job in Traficant's district office, working about 20 hours a week, and in exchange agreed to pay Traficant $2,500 in cash monthly.

Sinclair said the arrangement continued from late 1998 until January 2000, when Traficant told him that the FBI had begun investigating kickback allegations.

Although he is not a lawyer, the 60-year-old, nine-term congressman is defending himself on bribery, racketeering and other charges. If convicted, he could be sentenced to 63 years in prison and could face expulsion from the House.

"I didn't force anybody to do anything," he shouted in his opening statement. "You know what I did: I fought like hell for my people."

He said the evidence will show "that I have made tremendous enemies within the government."

Traficant said that from the day he beat federal prosecutors at a 1983 racketeering trial, he has been targeted by the IRS.

He also said he had incurred the wrath of the IRS because he pushed legislation that has made it harder for the IRS to foreclose on people's homes.

Traficant also warned jurors to be wary of government witnesses, saying they had been offered lesser penalties in their own criminal cases in exchange for their testimony.

U.S. District Judge Lesley Brooks Wells repeatedly stopped Traficant during his opening statement, saying he was trying to introduce irrelevant issues or discussing evidence that is not a part of the case.

She also cautioned him against making arguments in an opening statement that is intended only to summarize what the evidence will show.

Earlier Wednesday, Traficant filed a motion asking that the indictment against him be dismissed, saying the Sixth Amendment forbids the court from excluding Youngstown-area residents from the pool of potential jurors. He said the Sixth Amendment requires a trial by peers.

"My people were excluded" from the jury pool, he said outside court.

Under a 5-year-old system, jurors for federal trials in Cleveland are selected from the metropolitan area.