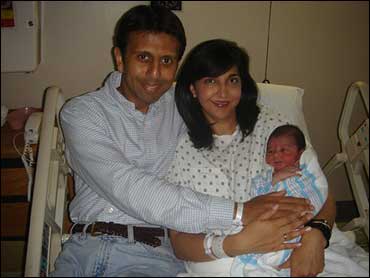 Rep. Bobby Jindal barely had time to call 911 when his wife woke with labor pains Tuesday. Minutes later, he helped deliver his own son.

Slade Ryan Jindal arrived before the ambulance did at about 3:25 a.m. Jindal, coached over the phone by a nurse at the doctor's office, put the baby in the arms of his wife, Supriya, and tied off the umbilical cord with a shoestring.

"We certainly didn't expect this," the Louisiana Republican said later Tuesday. "We thought we had more time than we did."

Their third child, born two days before his due date, weighed in at a healthy 8 pounds, 2 ounces, and measured 21 inches long.

Supriya Jindal had been to the hospital twice in the last week with pains thought to be contractions, her husband said. She was at the doctor's office as recently as Monday and was told there were no signs the baby would be coming as soon as it did, he said.

Mother and baby were resting comfortably Tuesday at a nearby hospital.

"We were very fortunate. There were no complications," said Bobby Jindal, 35.

Slade's 4-year-old sister, Selia, and 2-year-old brother, Shaan, were at the house and slept through the birth, Jindal spokesman Trey Williams said.

Williams said Jindal had dreamed of becoming a doctor: "He kind of got to play that role today."