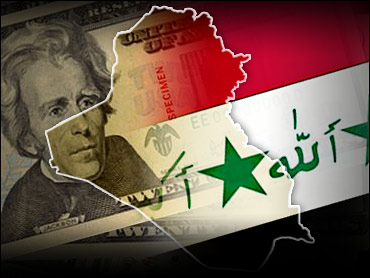 White House officials this week privately cautioned lawmakers not to go too far in restricting U.S. aid to Iraq, warning that doing so might only prolong the war, now in its sixth year.

The Bush administration did not slam the door on proposals in Congress that would insist Iraq do more to pay for its rebuilding efforts. In the meantime, independent investigators conclude in a report that substantial U.S. support continues despite Baghdad's anticipated $70 billion windfall in oil revenues.

The soaring cost of fuel prices and duration of the war have spurred the latest effort in Congress to get the Iraqis to pay more toward rebuilding efforts. Democrats and even some Republicans say American taxpayers are footing too much of the bill, including an expensive and painfully slow operation to train and equip Baghdad's security forces.

"There's going to have to be some honest-to-goodness pressure" to get the Iraqis to take charge, said Rep. Ike Skelton, chairman of the House Armed Services Committee. "We can't be there forever."

Administration officials are concerned that cutting U.S. aid, particularly for rebuilding Iraq's security forces, would only slow the war effort and delay the homecoming of troops.

"We're funding things that are in our interest to fund, that help us meet our goals and that we can do in the most efficient way," said White House spokesman Tony Fratto.

There are certain projects "that in the interest of speed and efficiency to accomplish our mission, it's better for us to spend the money," he said.

Lt. Gen. Douglas Lute, the president's war adviser on Iraq and Afghanistan, met on Capitol Hill behind closed doors Monday with three senators - Republican Susan Collins of Maine and Democrats Ben Nelson of Nebraska and Evan Bayh of Indiana - who have proposed a prohibition on spending for major reconstruction projects.

Their proposal also would require the Iraqis to pay for the training and equipping of its security forces and to reimburse the U.S. military for the estimated $153 million a month it spends on fuel in combat operations in Iraq.

"We obviously didn't see eye to eye on everything," Collins said after the meeting. But the administration seemed "open to some of it," she said.

One issue under discussion, Collins said, is which type of reconstruction projects would qualify as "major" and therefore be prohibited.

Fratto declined to comment on the discussions or specific legislative proposals but said there is much common ground between White House and Congress.

"I think we're in the same place in that the Iraqis should be doing more," Fratto said. "But I think people are neglecting the fact that they (the Iraqis) really are doing more."

In congressional testimony this month, the U.S. ambassador to Iraq, Ryan Crocker, declared that "the era of U.S. major infrastructure projects is over" - a claim validated by independent investigators.

According to the latest quarterly report by Stuart W. Bowen Jr., special inspector general for Iraq reconstruction, the U.S. is no longer the "prime mover" in major bricks-and-mortar construction efforts, and Iraq is expanding its budget this year to assume more responsibility of such projects.

But the U.S. continues to provide substantial financial aid to smaller, local projects, as well as rebuilding efforts aimed at improving security, the report states. In fact, the U.S. still has some $10 billion - out of the $46 billion approved by Congress since 2003 - to spend on reconstruction and relief projects. Most of that money is expected to provide Iraqi forces with training, equipment and new facilities, according to the study, which was released on Wednesday.

Meanwhile, the investigators estimate that Iraq's oil revenues will top $70 billion this year - twice what was initially expected. If oil prices stay high and the revenues produce a surplus, Iraq has promised to revise its annual budget and spend more.

Bowen said in an interview Tuesday that the Iraqis are taking on more responsibility on rebuilding efforts, but that lawmakers' concerns are still well founded. Last year, Baghdad spent half of its capital budget, he estimated.

"That's not enough. There is much that needs to be done in Iraq, (and) the Iraqi government needs to do it," Bowen said.

In a letter to Congress released Tuesday, Defense Secretary Robert Gates defended the Pentagon's latest plans to spend more than $400 million on certain infrastructure improvements for Iraqi security forces. Sen. Carl Levin of Michigan, chairman of the Armed Services Committee, had complained that such spending shouldn't be a U.S. responsibility, particularly in light of Iraq's expected oil surplus this year.

Gates responded by agreeing to block $171 million for police station construction. But the remaining $419 million for other infrastructure improvements and $20 million for training was warranted, he told Levin.

"I heard the committee loud and clear on the need for Iraq to pay for economic reconstruction and civilian infrastructure," Gates wrote. But helping the Iraqi security forces "to transition our troops to a different mission continues to be paramount."