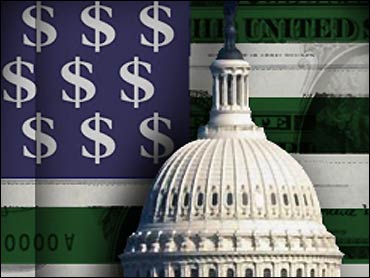 Republican tax writers plan to send President Bush an economic stimulus package just over half the size of the one he wanted, completing the $400 billion tax cut and spending bill before Memorial Day.

Republican moderates worried about record budget deficits blocked the White House from winning the $726 billion tax cut that the administration offered as the best recipe for economic growth.

Instead, GOP leaders and tax writers decided in a meeting with Bush on Monday to assemble a bill that cuts taxes $350 billion over the coming decade and spends roughly an additional $50 billion on state aid and child tax credits, said a congressional official speaking on condition of anonymity.

Negotiators have until Friday to work out details before lawmakers leave for a weeklong Memorial Day recess.

The plan combines House and Senate ideas for cutting taxes on investment income by temporarily suspending taxes on dividends and lowering taxes on capital gains. Both ideas respond to the president's request that Congress eliminate levies on dividends paid out of already taxed corporate earnings.

The Senate voted to halve dividend taxes this year and suspend them in 2004, 2005 and 2006. The House opted to cut the top rate on dividends and capital gains to 15 percent for most taxpayers and 5 percent for those in the lowest income brackets.

Merging the two approaches eliminates one of the biggest hurdles to compromise. The House and Senate have generally agreed on most other parts of the bill, which cuts income tax rates and lower taxes for married couples and small businesses.

The proposed compromise also drops a $35 billion tax increase on Americans working abroad that caused an outcry among business leaders and many Republicans. "I do not believe this Congress should raise taxes on some individuals and businesses in order to provide tax relief to others," Sen. George Allen, R-Va., wrote Monday to Senate Finance Committee Chairman Charles Grassley, R-Iowa.

The compromise under discussion gives fiscally stressed state and local governments $20 billion over 18 months for Medicaid and other needs. And it makes nearly $30 billion available to send refund checks to taxpayers who would qualify for a $1,000 child credit.

Hovering budget deficits prompted the Senate to halve the president's tax cut during debate last month over the nation's $2.2 trillion budget. The Senate passed a $350 billion tax cut last week by a narrow margin, with a few Democrats giving Republicans the winning edge. The House drafted its own larger bill, cutting taxes $550 billion over a decade.

Congress will finish the tax bill while also hurrying to add nearly $1 trillion to the nation's debt limit before the Treasury runs out of borrowing authority.