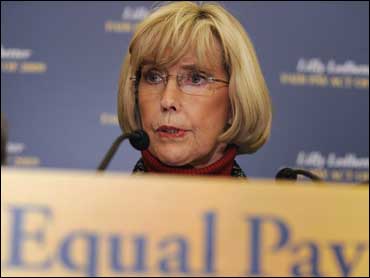 Congress sent the White House Tuesday what is expected to be the first legislation that President Barack Obama signs into law, a bill that makes it easier for women and others to sue for pay discrimination, even if the discrimination has prevailed for years, even decades.

White House press secretary Robert Gibbs said Obama would sign the bill, a top priority for labor and women's rights groups, Thursday during a public ceremony in the East Room.

The bill is a response to a 2007 Supreme Court ruling that said a person must file a claim of discrimination within 180 days of a company's initial decision to pay a worker less than it pays another worker doing the same job. Under the bill, every new discriminatory paycheck would extend the statute of limitations for another 180 days.

The measure, said House Speaker Nancy Pelosi after receiving a congratulatory phone call from Obama, is "a bold step to move away from that parsimonious interpretation" of the Supreme Court.

The plaintiff in the case, Lilly Ledbetter, argued that she did not become aware of the pay discrepancy until near the end of her 19-year career at a Goodyear Tire & Rubber Co. plant in Gadsden, Ala.

The Bush White House and Senate Republicans blocked the legislation in the last session of Congress, but Obama strongly supports it and the Democratic-controlled Congress moved it to the top of the agenda for the new session that opened this month.

"What a difference a new Congress and a president make," said Rep. George Miller, D-Calif., sponsor of the bill and chairman of the House Education and Labor Committee.

Obama invited Ledbetter, for whom the bill is named, to accompany him on his train trip to the inauguration ceremony in Washington. After the Senate vote last week, the 70-year-old retiree said Obama "has assured me that he would see me in the White House when they sign the bill."

Having succeeded with the Ledbetter bill, labor rights advocates can turn to tougher issues, including a controversial measure, expected to come up later this year, that would take away a company's right to demand a secret ballot when workers are deciding whether to join a union.

The Ledbetter bill focuses on pay and other workplace discrimination against women: The Census Bureau last year estimated that women still only receive about 78 cents for every dollar that men get for doing equivalent jobs. But the measure, which amends the Civil Rights Act of 1964, also applies to discrimination based on factors such as race, religion, national origin, disability or age.

Supporters argued that the 5-4 Supreme Court decision throwing out Ledbetter's claim was unrealistic for most work environments in which employees are unaware of, or even barred from talking about, the salaries of their co-workers.

They said it rewards companies that manage to keep wage discrimination secret for more than six months.

Opponents contended that the legislation would gut the statute of limitations, encourage lawsuits and be a boon to trial lawyers. They also argued that employees could wait to file claims in hopes of reaping larger damage awards.

But backers pointed out that the bill does not change current law limiting back pay for claimants to two years, so there would be no incentive to wait to file a claim.

The House first passed the bill on Jan. 9, just days after convening the new session of Congress. The Senate approved it last week by 61-36, with all 16 female senators, including four Republicans, voting for it.

The House had to vote again because it originally coupled the bill with another labor measure making it easier to receive damage awards for discrimination. The Senate separated the two, putting off the second bill, which faced more opposition, for later in the year.