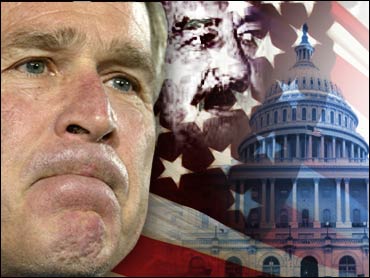 Both the House and the Senate have now voted to authorize war-making powers for President Bush, who heralded the chamber's vote as a resounding message to United Nations and to the world that "the gathering threat of Iraq must be confronted fully and finally."

The resolution - which authorizes President Bush to launch a military attack against Iraq if he decides it is necessary - was approved by the House Thursday evening and the Senate followed suit shortly after 1 a.m. Friday.

In the House, the vote was 296-133, with a majority of Democrats voting against the resolution.

In the Senate, the vote was 77-23, with 21 Democrats voting no, joined by Independent Sen. Jim Jeffords of Vermont and Republican Sen. Linc Chafee of Rhode Island.

Because the Senate approved the House-passed measure without changing a word, it now goes directly to President Bush for his signature.

In the first response from Iraq, Deputy Premier Tariq Aziz said Friday his country was ready to confront any attack against his country.

"I am not surprised by the resolution because America's decision is a decision of its president who can rally the Congress's support," Aziz, who is in Lebanon as part of a regional tour seeking support, said following a meeting with President Emile Lahoud.

Asked if he expected imminent American military action against Iraq, Aziz, who arrived in Beirut Thursday, said: "I don't know. We do not set the timing, but we are prepared for it at all times, even if it came after one hour."

As lawmakers wrestled with issues of war and peace on Capitol Hill, thousands of U.S. troops were engaged in war games simulating an incursion in Iraq. CBS News Correspondent David Martin reports the maneuvers are taking place in locations including Kuwait and Poland and include practice of land and air movements that could be used if troops were to go all the way into Baghdad.

The Congressional vote endorsing the resolution on Iraq is seen as a solid endorsement of Mr. Bush's insistence that he will work with the United Nations if possible, or alone if necessary, to disarm Saddam of his weapons of mass destruction.

"Mr. President we are about to give you a great trust," said House Majority Leader Dick Armey, R-Texas.

"The House of Representatives has spoken clearly to the world and to the United Nations Security Council: the gathering threat of Iraq must be confronted fully and finally," said President Bush, after telephoning House leaders to thank them for the vote.

"Today's vote also sends a clear message to the Iraqi regime: you must disarm and comply with all existing U.N. resolutions or it will be forced to comply. There are no other options for the Iraqi regime. There can be no negotiations. The days of Iraq acting as an outlaw state are coming to an end," said the president.

President Bush has stressed that he has not at this point made a decision on whether to launch a military strike against Iraq.

House Democratic Leader Dick Gephardt of Missouri is one of the authors of the resolution.

"The issue is how to best protect America. And I believe this resolution does that," says Gephardt.

It's an opinion not shared by Democratic Sen. Robert Byrd of West Virginia, the resolution's most outspoken opponent, who accuses Congress of having handed the president "unchecked authority."

Another prominent voice of dissent came from Sen. Edward Kennedy. "The power to declare war is the most solemn responsibility given to Congress by the Constitution," said the Massachusetts Democrat and former presidential candidate. "We must not delegate that responsibility to the president in advance."

Senate approval of the war powers resolution came after the measure picked up the vital support of the Senate Majority Leader Tom Daschle of South Dakota.

CBS News Correspondent Bob Fuss reports the debate leading up to the final vote ran the gamut from those who argued a war with Iraq would be a mistake, would increase terrorism and make the world more dangerous, to Nevada Republican Sen. John Ensign, who made the case that war is the only choice.

Earlier Thursday, as Daschle put aside his misgivings and backed the resolution, the Majority Leader explained that he believes "it is important for America to speak with one voice" on the question of Iraq.

Daschle's support was crucial to the administration's hope for a substantial vote. Previously, he had not signed onto the agreement moving through Congress, which was the product of negotiations between the White House and House leaders.

Daschle said the measure still has shortcomings, but he called it an improvement over the administration's initial request for broad authority.

The bipartisan agreement gives the president most of the powers he asked for, allowing him to act without going through the United Nations. But in a concession to Democratic concerns, it encourages him to exhaust all diplomatic means first and requires he report to Congress every 60 days if he does take action.

House Democrats urged the president to work closely with the U.N. before making a decision to go it alone against Iraq. "Completely bypassing the U.N. would set a dangerous precedent that would undoubtedly be used by other countries in the future to our and the world's detriment," said Gephardt.

While concerns remained about the dangers of going to war against Iraq without a strong international coalition, Thursday's vote showed stronger support for the president than his father received 11 years ago on another Iraq resolution. The House voted then 250-183 to endorse using American troops to drive Iraq from Kuwait.

"It is only when the Iraqi dictator is certain of our willingness to wage war if necessary that peace becomes possible," said Rep. Tom Lantos, D-Calif.

Mr. Bush has stressed he has made no decision about using military force against Iraq. It could take months, once that decision is made, for the military to prepare for an all-out strike.

With Congress behind him, Mr. Bush will press his case with the United Nations Security Council that it must approve a tough new resolution holding Iraq to unfettered inspections and disarmament and promising force if Iraq does not comply.

"The president hopes this will send a strong message to the world, and to Iraq, that if Iraq does not obey the U.N. resolutions, that the United States is prepared to enforce the peace," White House press secretary Ari Fleischer said.

Meanwhile, some 130 nations pressing for a peaceful solution in Iraq asked the U.N. Security Council to hold an emergency open meeting before it votes on a new resolution that could authorize military action against Iraq.

The move by the Nonaligned Movement, whose members are mainly from developing countries, would put the U.S. and British demands for military authorization under a microscope by shifting what have been closed-door talks into a public format.

Council members supported the request for an open meeting and council president Martin Belinga-Eboutou told members he would set a date after consultations.