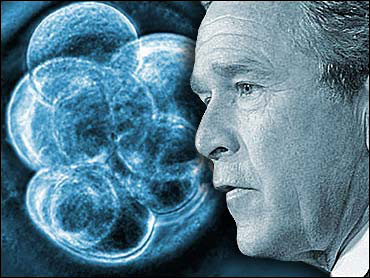 Round two of Congress' battle with President Bush over the morality of stem cell research opens this week, with opponents bolstered by a study that suggests stem cells can be extracted from pregnant women's amniotic fluid as well as from human embryos.

But opponents won't have much luck peeling off support from a bill to be debated in the House this week that would clear the way for expanding taxpayer-funded embryonic stem cell research, a co-sponsor of the bill predicted.

"We won't lose anyone who was going to support the bill," said Rep. Diana DeGette, D-Colo., one of her party's vote-counters in the House.

But, she said, "People who would have already opposed the (embryonic) stem cell bill will use this breakthrough as an excuse to vote no."

In contrast, the research reported this week suggests that stem cells extracted harmlessly from the amniotic fluid that cushions a fetus in-utero hold much the same promise for disease-fighting as embryonic stem cells. Scientists hope that someday stem cells may be used against diseases such as for Lou Gehrig's, diabetes, Alzheimer's and cancer.

"We're talking about saving lives here," said Rep. Phil Gingrey, R-Ga., an obstetrician and staunch opponent of embryonic stem cell research. "We don't have to split the nation on this if we've got an alternative."

Polls show Americans overwhelmingly support federal funding for embryonic stem cell research. And scientists aren't sure that stem cells shed by a fetus and extracted from the surrounding fluid carry the same possibility for treatments and cures of diseases as those culled from embryos.

The scientific community says embryonic stem cells so far are backed by the most promising evidence that one day they might be used to grow replacements for damaged tissue, such as new insulin-producing cells for diabetics or new nerve connections to restore movement after spinal injury

Sen. Tom Harkin, D-Iowa, who is sponsoring the same bill in the Senate, called it cruel to raise expectations that stem cells derived from amniotic fluid carry the same promise as embryonic stem cells.

He said the report on the new research "offers no evidence that amniotic stem cells have as much potential as embryonic stem cells to differentiate into all other cells in the human body."

The report by researchers at Wake Forest and Harvard universities appears in the January edition of the journal Nature Biotechnology.

Whatever the effect of the discovery on the policy debate, Mr. Bush is all but certain to cast a second veto of the embryonic stem cell bill if it reaches his desk.

White House spokesman Tony Snow on Monday stopped short of issuing an endorsement of the amniotic process, but he made clear that the president views it favorably.

"Obviously, there is a difference between using amniotic stem cells that do not, by design, involve the destruction of a human life, and embryonic stem cell research, which does," Snow told reporters.

Co-sponsored by DeGette and Rep. Mike Castle, R-Del., the legislation would lift Mr. Bush's 2001 ban on federal dollars spent on deriving new stem cells from fertilized embryos. The president cast the lone veto of his presidency against an identical stem cell bill six months ago, saying he did not want to destroy life in the name of science.

The House is not expected to muster the two-thirds majority to override a veto. The Senate, expected to take up the bill in a few weeks, may be a handful of votes away from that veto-proof threshold.

Embryonic stem cells are able to morph into any of the more than 220 cell types that make up the human body. They typically are culled from fertility-clinic leftovers otherwise destined to be thrown away. But because the culling kills the embryos, Mr. Bush on Aug. 9, 2001, restricted government funding to research using only the embryonic stem cell lines then in existence, groups of stem cells kept alive and propagating in lab dishes.

But there are only about 21 of those lines available for study, most created in ways that preclude use in humans. At least 300 more lines now are available that many scientists insist are better suited for implantation into sick people.