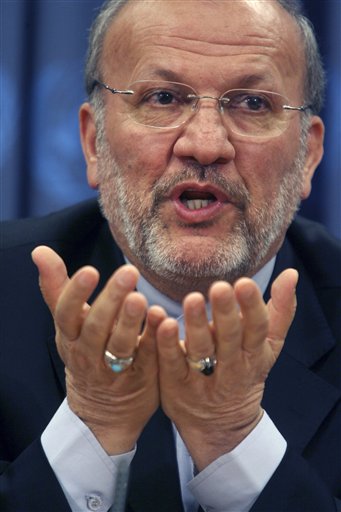 Congress is poised to act swiftly to impose tough new sanctions on Iran if international talks on Tehran's nuclear program show signs of faltering. Already, some lawmakers are demanding that the United States strike immediately with new penalties rather than wait for an uncertain multinational consensus.

"Congress must equip President (Barack) Obama with a full range of tools to deal with the threats posed by Iran," Dodd said, outlining measures to expand sanctions to cover a wider range of financial transactions, including a new ban on exporting refined petroleum to Iran. His committee plans a hearing on the subject Tuesday.

Obama said talks Thursday in Switzerland between Iran and six world powers, where Iran indicated it would open its newly disclosed nuclear plant to U.N. inspectors, were "a constructive beginning." But he said Iran must match its words with actions.

The president said his administration, in conjunction with Congress, is crafting plans that could target Iran's energy, financial and telecommunications sectors. The hope is to gain a united international front that includes China and Russia, countries reluctant in the past to restrict trade with Iran.

Several Democratic leaders, including Foreign Relations Committee Chairman John Kerry, D-Mass., say Iran should be given a short time to show it is acting in good faith before further sanctions, preferably multilateral, are imposed.

But House Majority Leader Steny Hoyer, D-Md., speaking to Republican Whip Eric Cantor of Virginia on the House floor Thursday, also stressed that, while the talks should be given a chance to succeed, "we don't have to wait, certainly for Russia or China or for anybody else, to take the action we deem to be appropriate."

Cantor prodded Democrats to restrict gas and refined petroleum exports to Iran, saying Republicans did not support the concept of waiting "until there is some collective agreement on the world stage in order for Congress to act."

Rep. Ileana Ros-Lehtinen, R-Fla., the top Republican on the House Foreign Affairs Committee, was more direct. "The U.S. must put away the begging bowl, act like a world leader and lead the effort to impose immediate, crippling sanctions on the Iranian regime," she said.

Ros-Lehtinen earlier this year introduced her own bill to strengthen sanctions against people aiding Iran's proliferation efforts. She has an ally in the Foreign Affairs Committee's Democratic chairman, Howard Berman of California. Berman is pushing a bill that would prohibit foreign entities that sell refined petroleum to Iran from doing business in the United States.

While Iran is a major oil producer, it imports gasoline and refined petroleum products. Stopping fuel shipments to Iran could have serious effects on the Iranian people.

Mideast expert Kenneth M. Pollack, director of the Saban Center at the Brookings Institution, said it was questionable whether such sanctions would work: There's bound to be leakage in the sanctions regime, Iran is quickly expanding its refinery capacity and Iran could manipulate world opinion by displaying the suffering of common Iranians, Pollack said.

The hardline positions of some in Congress, he added, could be useful to the White House as it tries to get U.S. allies on board for the administration's more targeted sanctions.

Bilateral sanctions imposed by the United States since the Iranian Revolution in 1979 already severely restrict trade and financial transactions with Iran.