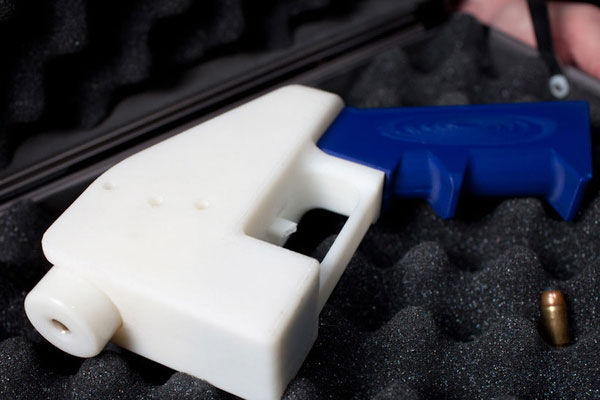 In seven days, a 25-year-old law making it illegal to manufacture firearms that cannot be detected by metal detectors is set to expire.

This does not sit well with Rep. Steve Israel (D-N.Y.), a sponsor of the re-authorization of the Undetectable Firearms Act.

“When the law was passed in 1988, the thought of a 3D printed gun was science fiction,” Rep. Israel told CBS News' Crimesider. “But today, a 3D printed gun that can fire lethally is a reality.”

In May, a non-profit company called Defense Distributed uploaded the blueprint for printing “the Liberator,” a fully functioning handgun made entirely of plastic – but for a small, removable metal firing pin. It was a game-changer, frightening gun-control advocates and exciting hobbyists. On Nov. 21, the Philadelphia City Council voted to ban manufacturing guns by 3D printers in the city.

“It is important for public safety for guns to be detectable,” says Adam Winkler, a professor of law at UCLA and the author of “Gunfight: The Battle over the Right to Bear Arms in America."

“Metal detectors work where gun control doesn’t, stopping those with malicious intent from bringing in guns,” he says. “3D printing will greatly exacerbate the problem of undetectable guns.”

The House of Representatives approved a 10-year re-authorization by a voice vote on Tuesday afternoon and in order to avoid a lapse in the law, the Senate will have to debate and pass its version on Dec. 9, the first day they come back into session.

Cody Wilson, the director of Defense Distributed, says that he sees the regulations as “onerous” and an example of an anti-gun administration’s efforts to tamp down on home production of firearms for personal use.

To Rep. Israel, however, the point isn’t a “100 percent guarantee” that firearms like the Liberator won’t get past airport security, but to make it more difficult, and to “elevate the risk and punishment” for trying.

To this end, he has proposed a bill which would "close a loophole" in the current legislation by mandating that all handguns have two permanent pieces of metal in them, and rifles have three. Wilson calls those numbers “completely arbitrary” and says that he sees the effort as an attempt to take gun-creation out of the hands of hobbyists entirely.

Wilson points out that many places – airports included – now use visual imaging technology, not metal detectors, to search for contraband.

UCLA’s Winkler acknowledges that detection technology is likely to evolve, but until it does, he believes the law is necessary and valuable.

“Without this law, it will be legal to make guns with no metal in them right away,” he says. “So many places rely on metal detectors today - failing to keep the ban in place would undermine security.”