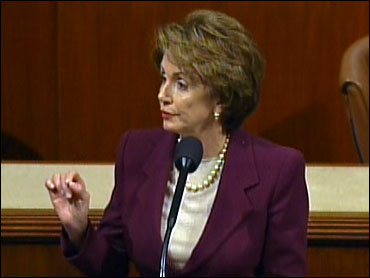 House Speaker Nancy Pelosi said Thursday that President Bush lacks the authority to invade Iran without specific approval from Congress, a fresh challenge to the commander in chief on the eve of a symbolic vote critical of his troop buildup in Iraq.

Pelosi, D-Calif., noted that Bush consistently said he supports a diplomatic resolution to differences with Iran "and I take him at his word."

At the same time, she said, "I do believe that Congress should assert itself, though, and make it very clear that there is no previous authority for the president, any president, to go into Iran."

Pelosi spoke in an interview in the Capitol as the House moved through a third marathon day of debate on a nonbinding measure that disapproves of the military buildup in Iraq while expressing support for the troops.

Passage of the measure was expected Friday. Pelosi and other Democrats have said approval would mark the first step in an effort by the new Democratic-controlled Congress to force Bush to change course in a war that has killed more than 3,100 U.S. troops.

Bush administration officials and their allies are resigned to House passage of the resolution and have worked in recent days to hold down defections by GOP lawmakers.

But Bush took a swipe at his critics.

"This may become the first time in the history of the United States Congress that it has voted to send a new commander into battle and then voted to oppose his plan that is necessary to succeed in that battle," the president said.

The Senate unanimously confirmed Lt. Gen David Petraeus last week to take over as the top U.S. commander in Iraq.

Bush said at a news conference Wednesday there is no doubt the Iranian government is providing armor-piercing weapons to kill American troops in Iraq. But he backed away from claims the top echelon of Iran's government was responsible.

Administration critics have accused the president of looking for a pretense to attack the Islamic republic, which is also at loggerheads with the United Nations about what Tehran says is a nuclear program aimed at developing energy for peaceful purposes.

Defending U.S. intelligence that has pinpointed Iran as a hostile arms supplier in Iraq, Bush said, "Does this mean you're trying to have a pretext for war? No. It means I'm trying to protect our troops."

Bush has asked Congress to approve $100 billion for the wars in Iraq and Afghanistan. Congressional Democrats are hoping to insert provisions that would make it harder for the administration to follow through on its plan to deploy an additional 21,500 combat troops to Iraq.

Rep. John Murtha, D-Pa., who is leading the effort, has said the measure may be changed to require that any troops deployed must meet formal Army readiness standards.

The measure also would set equipment and training requirements that the military can't currently meet, reports CBS News correspondent Sharyl Attkisson. Additionally, the measure would stop the Pentagon from extending current battlefield tours, a practice that has become routine.

Murtha also said the measure may be changed to prohibit any military action against Iran without specific congressional approval.

Asked about Murtha's remarks, Pelosi said, "I fully support that." She added that she would propose it as stand-alone legislation if it is not included in the bill that provides more money for the Iraq war.

Bush has said he intends to go ahead with the troop buildup, regardless of nonbinding expressions of disapproval in Congress.

But, Pelosi said, "I don't think that the president can completely ignore it."

She spoke down the hall from the House chamber, where Republicans and Democrats alternated turns at the microphone in a debate on the war.

"The enemy wants our men and women in uniform to think their Congress doesn't care about them," said Rep. Sam Johnson, R-Texas, who was a prisoner of war during Vietnam.

Added Rep. Geoff Davis, R-Ky., a West Point graduate who was a flight commander with the Army's 82nd Airborne: "This nonbinding resolution serves no purpose other than pacifying the Democrats' political base and lowering morale in our military."

When his turn came to speak, Rep. Lloyd Doggett, D-Texas., said, "There is a better way of protecting our troops than sending more of them to be killed."

Rep. James Clyburn of South Carolina, a member of the Democratic leadership, said the victory to be won in Iraq "is not a military conquest."

"The victory we seek is earned through the restoration of America's role as peacemaker, not warmonger," he said.

Also Thursday, Senate Majority Leader Harry Reid said the Senate will hold another test vote Saturday on the Iraq resolution. Senators have been unable to begin debate for two weeks because of partisan bickering over the procedural terms. Democrats would need 60 votes to bring the resolution back up when Congress returns after a week's recess.

"We demand an up-or-down vote on the resolution that the House is debating as we speak," said Reid, D-Nev.