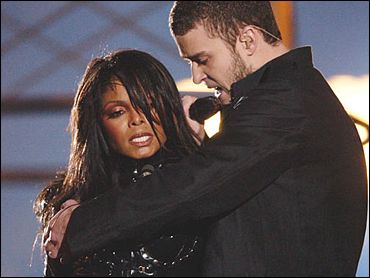 A House panel looking into indecency on the airwaves was hearing Wednesday from National Football League Commissioner Paul Tagliabue and Mel Karmazin, president of Viacom Inc. — owner of both CBS, which aired Janet Jackson's breast-baring Super Bowl halftime show, and MTV, which produced the show.

All five members of the Federal Communications Commission also were expected to testify before the House Energy and Commerce telecommunications subcommittee and at a separate hearing of the Senate Commerce Committee.

The Super Bowl incident occurred at a time when lawmakers are pressing the FCC to crack down on indecent programming. The agency has received more than 200,000 complaints about the halftime show, which ended with singer Justin Timberlake tearing off part of Jackson's top and exposing her right breast to millions of TV viewers.

Bills have been introduced in both houses of Congress that would increase the fines that the commission may levy for indecency from $27,500 to $275,000. The commissioners have discussed fining broadcasters for each prohibited utterance rather than for each program.

Last month, the FCC proposed a record $755,000 fine against Clear Channel Communications, the nation's largest radio station chain, for the "Bubba the Love Sponge" program aired on four of its Florida outlets.

But the Super Bowl incident was expected to be a major focus of Wednesday's hearings.

"CBS gave everyone on the FCC, everyone in Congress, every parents' organization, every parent a slap in the face and said, 'Go to hell,'" said L. Brent Bozell III, president of the Parents Television Council, a conservative advocacy group.

"The wake-up alarm went off at the FCC," Bozell said. "Now what you're seeing are the commissioners taking a very strong public position on this."

All five commissioners criticized the Super Bowl broadcast, and the FCC launched an investigation at the behest of Michael Powell, the commission's chief.

It's not only the commissioners that are angry.

"They knew that this was beneath the standards, including CBS running some lewd and crude commercials during the Super Bowl," said House Majority Leader Tom DeLay, R-Texas. "Everybody has got egg on their face."

While criticizing Viacom, Congress last month voted to allow the company to own more television stations. Bowing to a veto threat from President Bush, lawmakers agreed to let companies like Viacom own television stations reaching 39 percent of the viewing public, up from 35 percent.

The FCC says it has stepped up enforcement of indecency rules. But the agency's enforcement bureau in December declined to fine NBC for airing an expletive uttered by rock star Bono during the 2003 Golden Globe Awards show.

The commission is considering whether to overrule the bureau in that case.

Both performers, as well as the NFL, CBS and MTV, have apologized and insisted the incident was not planned.

In an exclusive interview with CBS affiliate KCBS last week, Timberlake said he was "frustrated" by the post-Super Bowl controversy over what he has called a "wardrobe malfunction" during a breast-baring bump-and-grind dance number with Janet Jackson.

Timberlake said he was upset the event had thrown his character into question and that he was "completely shocked and appalled" when the right cup of Jackson's black leather bustier pulled away to reveal her bare breast clad in only a silver "nipple shield" instead of a red lace bra.

Jackson last week issued a second apology in a videotape released to the media.

"I am really sorry if I offended anyone. That was truly not my intention," she said. "MTV, CBS, the NFL had no knowledge of this whatsoever, and unfortunately, the whole thing went wrong in the end."

"This was done completely without our knowledge," said Chris Ender, entertainment spokesman for CBS, which was deluged with angry calls. "It wasn't rehearsed. It wasn't discussed. It wasn't even hinted at. ... This is something we would have never approved. We are angry and embarrassed."

"We attended all rehearsals of the show and there was no indication at any time that such an inappropriate display was contemplated," CBS President Leslie Moonves told employees in e-mail. "We are angry and embarrassed that this happened."

The NFL said it was "extremely disappointed."

According to the FCC, non-cable TV channels cannot air "obscene" material at any time and cannot air "indecent" material between 6 a.m. and 10 p.m. The FCC defines obscene as describing sexual conduct "in a patently offensive way" and lacking "serious literary, artistic, political or scientific value." Indecent material is not as offensive but still contains references to sex or excretions.