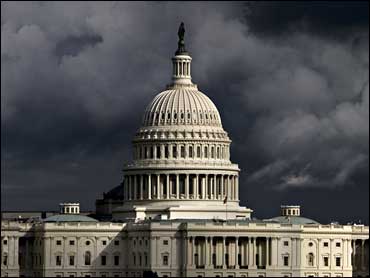 Congressional leaders and the White House agreed to a $700 billion rescue of the ailing financial industry after lawmakers insisted on sharing spending controls with the Bush administration.

The biggest U.S. bailout in history won the tentative support of both presidential candidates and goes to the House for a vote Monday.

CBS News correspondent Bob Fuss reports the bailout measure's passage by the full House is far from assured. Republican Rep. Ted Poe of Texas warned Sunday; "Backroom deals have always troubled me because they usually turn out to be bad deals for Americans."

The plan, held up for days by election-year politics, would give the administration broad power to use billions of taxpayer dollars to purchase devalued mortgage-related assets held by cash-starved financial firms.

Mr. Bush called the vote a difficult one for lawmakers but said he is confident Congress will pass it.

"Without this rescue plan, the costs to the American economy could be disastrous," Mr. Bush said in a written statement released by the White House. He was to speak publicly about the plan early Monday morning, before U.S. markets open.

Flexing its political muscle, Congress insisted on a stronger hand in controlling the money than the White House had wanted. Lawmakers had to navigate between angry voters with little regard for Wall Street and administration officials who warned that inaction would cause the economy to seize up and spiral into recession.

A deal in hand, Capitol Hill leaders scrambled to sell it to colleagues in both parties and acknowledged they were not certain it would pass.

"Now we have to get the votes," said Sen. Harry Reid, a Nevada Democrat who is the majority leader.

Rep. John A. Boehner, an Ohio Republican and the House minority leader, said he was urging "every member whose conscience will allow them to support this," but officials in both parties expected the vote to be a nail-biter.

The final legislation was released Sunday evening, and Republicans and Democrats huddled for hours in private meetings to learn its details and voice their concerns.

Many said they left undecided, and leaders were scrambling to put the most positive face on a deeply unpopular plan.

"This isn't about a bailout of Wall Street, it's a buy-in, so that we can turn our economy around," said House Speaker Nancy Pelosi, a California Democrat.

The largest government intervention in financial markets since the Great Depression casts Washington's long shadow over Wall Street. The government would take over huge amounts of devalued assets from beleaguered financial companies in hopes of unlocking frozen credit.

The plan would let Congress block half the money and force the president to jump through some hoops before using it all.

The government could get at $250 billion immediately, $100 billion more if the president certified it was necessary, and the last $350 billion with a separate certification - and subject to a congressional resolution of disapproval.

Read a one-page summary of the bill.

Still, the resolution could be vetoed by the president, meaning it would take extra-large congressional majorities to stop it.

Lawmakers who struck a post-midnight deal on the plan with Treasury Secretary Henry Paulson predicted final congressional action might not come until Wednesday.

A breakthrough came Saturday night, with the addition of a requirement sought by centrist Democrats and Republicans to ensure that the government be paid back by companies that got help. The president would have to tell Congress after five years how he planned to recoup the losses.

Another key bargain - this time to draw Republican support - allows, but doesn't require, government to insure some bad home loans rather than buy them. That's designed to limit the amount of federal money used in the rescue.

"This is something that all of us will swallow hard and go forward with," said Republican presidential nominee John McCain.

His Democratic rival Barack Obama sought credit for taxpayer safeguards added to the initial proposal from the Bush administration. Later, at a rally in Detroit, Obama said, "it looks like we will pass that plan very soon."

The rescue would only be open to companies who deny their executives "golden parachutes" and limit their pay packages. Firms that got the most help through the program - $300 million or more - would face steep taxes on any compensation for their top people over $500,000.

The government would receive stock warrants in return for the bailout relief, giving taxpayers a chance to share in recipients' future profits.

To help struggling homeowners, the plan would require the government to try renegotiating the bad mortgages it acquires with the aim of lowering borrowers' monthly payments so they can keep their homes.

Lawmakers in both parties who are facing re-election are loath to embrace a costly plan proposed by a deeply unpopular president that would benefit perhaps the most publicly detested of all: companies that got rich off bad bets that have caused economic pain for ordinary people.

But many of them say the plan is vital to ensure their constituents don't pay for Wall Street's mistakes, in the form of unaffordable credit and major hits to investments they count on, like their pensions.