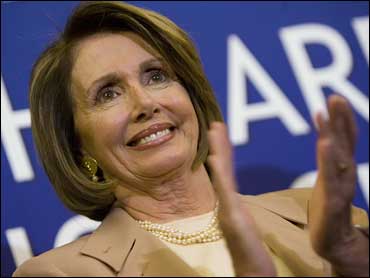 This story was written by Lisa Lerer and Manu Raju.


Nancy Pelosi said this week that she's keeping the door open for a second stimulus bill.

She may be the only one.

As the nation continues to shed jobs, an increasing number of economists are saying Congress will need to pump more money into the economy this year. But reaction on Capitol Hill has been almost uniformly negative - and much of the blowback is coming from Democrats.

"It is too soon," said House Financial Services Committee Chairman Barney Frank (D-Mass.). "No sensible person is trying to guess what will be appropriate policy six months from now."

"It sounds to me that would be a monumental lift," said Sen. Ron Wyden (D-Ore.). "Somebody's going to have to convince me how they're going to pay for it."

Just three weeks after President Barack Obama signed a $787 billion stimulus package - and on the same day that he signed a $410 billion omnibus bill loaded with earmarks - the idea of spending more money to juice the economy was one that few members were willing to embrace.

Even Pelosi's staff tried to walk back comments the speaker made Tuesday.

At a press briefing Tuesday, Pelosi stood beside Moody's economist Mark Zandi as he said that "another stimulus package is a reasonable probability," that Congress was "likely" going to need to approve "more money for financial stability to shore up the banking system," and that "more money for foreclosure mitigation may also be necessary at the end of the day."

Asked if she agreed, Pelosi preached patience with the first stimulus package but added that, "as has been said by the economists to us in that room and Mark here, we have to keep the door open to see how this goes."

Staffers said Wednesday that Pelosi wasn't saying that another package was definitely in the works - but they also said that it would be "irresponsible" to rule out the idea that another stimulus might be needed.

But the political damage was already done. Republicans seized on press reports about Pelosi and Obey, arguing that talk of a second stimulus was an implicit admission that the first stimulus won't work.

"Just three weeks after President Obama signed his 'stimulus' bill into law, congressional Democrats are already conceding that it will fail to achieve its objective," House Minority Whip Eric Cantor (R-Va.) said in a statement. "As the speaker knows, the only reason to craft a second stimulus bill would be if the first one failed. Every Republican in the House voted against the first stimulus bill because we believed that Congress could do better, and we had a plan to achieve that goal. America does not need another massive spending bill. What we need is to create jobs."

Across the Capitol, Democrats argued for time - time for the existing stimulus to work and time before they have to start talking about a new one.

"I would be a little bit patient," said Florida Blue Dog Democrat Rep. Allen Boyd. "The more deficit spending you do, the more likely you are to exacerbate the long-term problem."

"Three weeks is not exactly a timeline for anything," said Rep. Rosa DeLauro (D-Conn.). "We're talking about looking at what is going to happen through the end of this year."

Democrats say the stimulus was designed as a time-release capsule, with different provisions providing economic boosts at different times.

A version of the "making-work-pay tax credit," a ceterpiece of Obama's campaign that will give a small refundable payroll tax credit to lower- and middle-income employees, theoretically should pump money into the economy immediately as struggling workers spend the extra money on things like groceries, child care and other necessities. The infrastructure investments, which must be shovel-ready within 90 days, will most likely hit the economy by the second half of this year, say economists, if the stimulus works according to plan.

But lawmakers may not get months from voters anxiously watching their investment portfolios shrink, their homes lose value and their jobs disappear.

New polling released by Gallup on Tuesday showed little if any improvement in consumer mood and spending since Obama signed the stimulus last month. The poll results should come as no surprise: The economy has continued to worsen, with unemployment rising to 8.1 percent and the stock market dipping to its lowest point in 12 years.

On Monday, investment guru Warren Buffett, an informal economic adviser to the administration, said the economy "has fallen off a cliff."

Things are only going to get worse, Brookings Institution economist Rebecca Blank warned after a meeting with the House Democratic Caucus on Tuesday. Blank said employment and jobs numbers will lag four to six months behind the first signs of economic growth.

By Lisa Lerer and Manu Raju