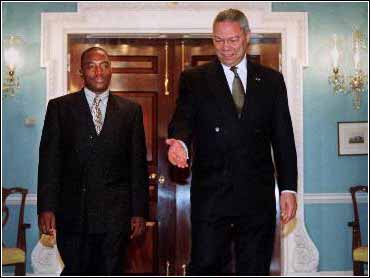 Just a week after his swearing-in as president of the Democratic Republic of Congo, Joseph Kabila has transformed himself from the obscure heir of a slain dictator into the African Kissinger. He received South African President Thabo Mbeki Tuesday in Kinshasa, then it was off to Paris, Washington and New York for meetings with various foreign leaders.

While there's considerable reason to doubt his fitness for the job—he has no political experience and reportedly even an unsteady grasp of his country's official language—Kabila, reportedly 29, is attempting to cast himself as a credible leader and reformer for the troubled African nation.

One of those appraising the new Congolese president is Secretary of State Colin Powell, who prior to their Thursday meeting called Kabila's inaugural address "interesting and impressive."

In that speech, Kabila pledged free elections, a liberalized economy and deployment of international peacekeeping forces as part of an effort to implement an oft-violated Lusaka peace agreement signed in 1999.

Critics note that his father, Laurent Kabila, came to power in 1997 with many of the same promises for reform when he overthrew then-president Mobutu Sese Seko. But the elder Kabila turned out to be an impediment to peace who constantly violated human rights and impinged on press freedoms.

"Former President Kabila regularly and ruthlessly violated the human rights of the Congolese people, killing, torturing, imprisoning, and causing the 'disappearance' of any who he thought threatened him or his regime," Human Rights Watch reported in its latest background note on the Congo.

"I don't think there are many tears being shed today, frankly, for the departure of a regime that has seen its better days," State Department spokesman Nicholas Burns said of the fall of Mobutu in May 1997, as the elder Kabila's troops were marching on Kinshasa.

That statement seems just as fitting—and ironic, considering the role reversal for Laurent Kabila—almost four years later. Kabila, the erstwhile rebel, had taken the mantel of the entrenched dictator he replaced.

Not only had he failed to deliver on promises of a new constitution and elections, he had become an obstacle to ending itractable war raging within the Congo as justification for his strong-arm tactics.

The United Nations, the U.S. and other countries had been pushing him to commit to the 1999 peace agreement, but the elder Kabila balked repeatedly, drawing the ire of many in the international community.

But if his first week in office is any indication, there's reason to believe Joseph Kabila is more committed to change than his father, who had become increasingly isolated from the world community.

The new president is striking out early and building crucial support of foreign governments. By meeting with Powell and French President Jacques Chirac, Kabila is establishing ties with the two of the three Western nations with a stake in the Congo (former colonial ruler Belgium being the third).

He'll need their backing if he has any hope implementing the Lusaka Accords, which aimed at bringing an end to 30-month conflict that pits the Congolese government, backed by Zimbabwe, Zambia and Angola, against rebels supported by Uganda and Rwanda.

According to U.S. estimates, the war has displaced 2 million people since it began in August 1998, generating over 327,000 refugees. On Thursday, the State Department gave Kabila part of what he needs, an emergency assistance package of $10 million for refugees and conflict victims. But beyond triage, if he is to achieve a long-term resolution, Kabila will need U.S. political muscle to encourage U.S. allies Uganda and Rwanda to pull out of the Congo and cease aid to rebels.

Rwanda is the key. For a revival of Lusaka, Rwanda will have to pull its troops out of the Congo. But as a precondition for that withdrawal, Rwanda will need help curbing rebels who threaten its security from bases within eastern Congo. That appears increasingly likely as Joseph Kabila signaled he will allow a long overdue U.N. peacekeeping force to deploy in the Congo.

"We need to kick-start the Lusaka accord," Kabila said Thursday after meeting Powell.

Though hopeful, these are only first steps. The Congo is big and diverse—roughly 50 million citizens represented by more than 200 ethnic groups in a country the size of the U.S. east of the Mississippi—and with six foreign armies and an array rebel groups fighting inside its borders, ending the war will be difficult. And then there will be the task of establishing a viable, democratic country where none has ever existed.

The U.S. will have to help, and the assent of Joseph Kabila seems to offer the best opportunity to bring stability to a region that badly needs it. Powell is setting the right tone by meeting Kabila and Kagame, and indicating early in his tenure hat he plans to give high priority to African issues. But it will take time.

"We shouldn't expect it to disappear from the screen as a problem immediately, even if Joseph turns out to be the best guy in the world," he cautioned. "It will be a slow, step-by-step business."

By Rob Mank
©MMI Viacom Internet Services Inc. All Rights Reserved. This material may not be published, broadcast, rewritten, or redistributed. The Associated Press and Reuters Limited contributed to this report