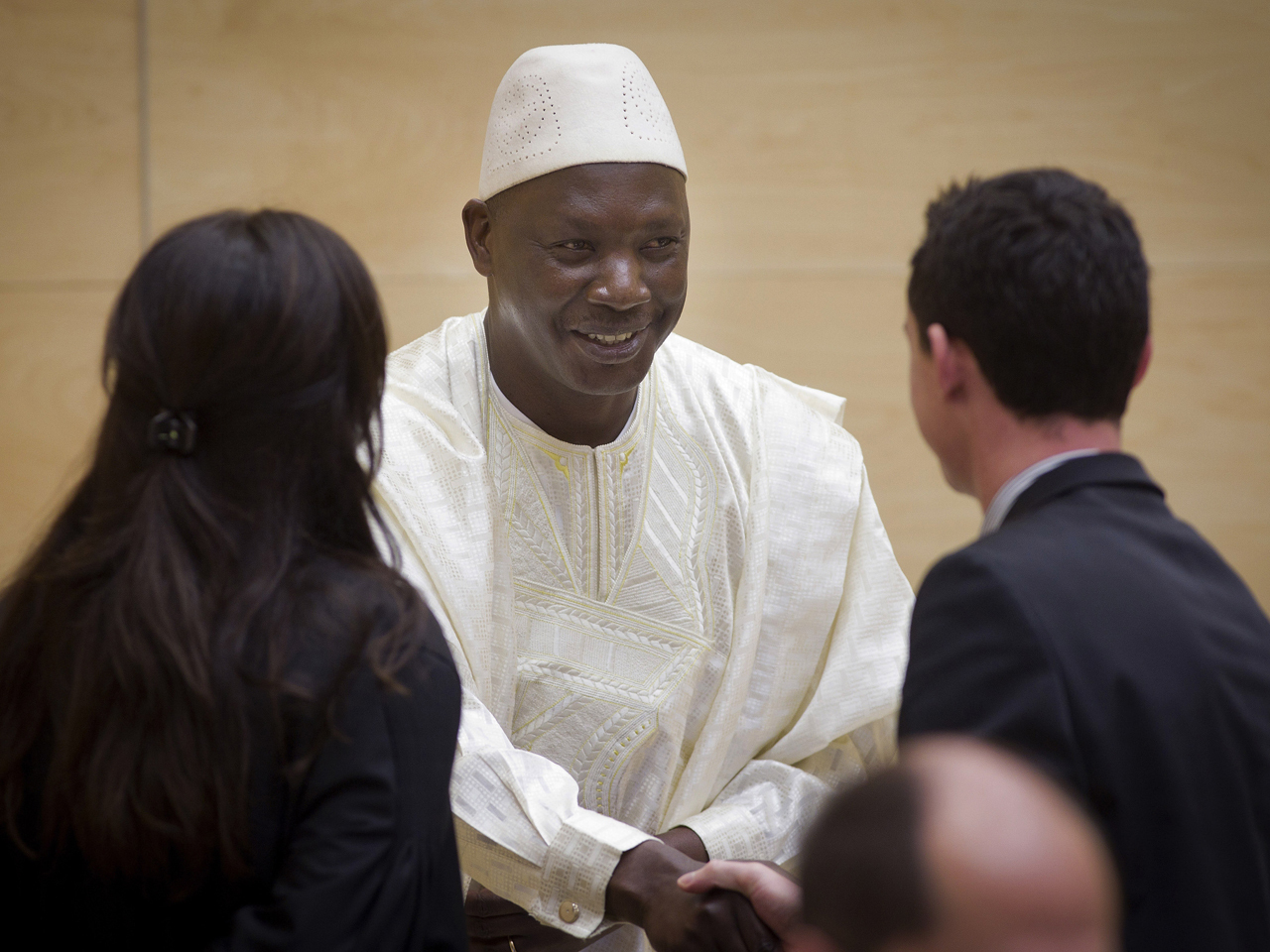 (AP) THE HAGUE, Netherlands - Judges at a war crimes tribunal convicted a Congolese warlord Wednesday of snatching children from the street and turning them into killers, in the International Criminal Court's landmark first judgment 10 years after it was established.

"The prosecution has proved beyond reasonable doubt that Mr. Thomas Lubanga is guilty of the crimes of conscripting and enlisting children under the age of 15 years and using them to participate actively in hostilities," said Presiding Judge Adrian Fulford.

Lubanga, wearing an ivory-colored robe and skull cap, sat with his hands clasped in front of him listening to the verdict and showed no emotion as Fulford declared him guilty.

Actress and activist Angelina Jolie watched the hearing from the public gallery and said the verdict was a victory for the former child soldiers.

"This is their day — where these children will feel there is no impunity for what happened to them, for what they suffered," Jolie said.

As he left court flanked by guards, Lubanga nodded and smiled to supporters in the public gallery. A sentencing hearing will now be scheduled. Lubanga faces a maximum sentence of life imprisonment.

Judges said Lubanga, "personally used children below the age of 15 as his bodyguards."

While the three-judge panel unanimously convicted Lubanga, it also harshly criticized prosecutors as "negligent" for using intermediaries to deal with witnesses in Congo.

Fulford said three intermediaries "persuaded, encouraged or assisted witnesses to give false evidence" and scrapped the evidence of three witnesses.

"The Prosecutor's office must review its limited investigation strategy adopted in the Lubanga case, especially in light of such decisions precluding victims from participating in trials and obtaining reparation," said Michael Bochenek of Amnesty International. "Lessons need to be learned for future cases."

Amnesty also criticized the court for not charging Lubanga with sexual violence crimes, saying the decision potentially denied "justice and reparation to many more victims."

However, other witnesses and video of Lubanga speaking to recruits, some of them children, at a training camp provided enough evidence to convict him.

Prosecutors said Lubanga led the Union of Congolese Patriots political group and commanded its armed wing, the Patriotic Forces for the Liberation of Congo, which recruited children — sometimes by force, other times voluntarily — into its ranks to fight in a brutal ethnic conflict in the Ituri region of eastern Congo.

The trial, which began in January 2009, is the first at an international court to focus exclusively on the use of child soldiers and activists say it should send a clear message to armies and rebels around the world that conscripting children breaches international law.

The United Nations estimates tens of thousands of child soldiers are still fighting in conflicts from Africa to Asia and Latin America.

"The guilty verdict against Lubanga is a strong warning to military commanders in Congo and elsewhere: using children as a weapon of war is a serious crime that can lead them to the dock," said Geraldine Mattioli-Zeltner of Human Rights Watch.

The first verdict is a coming of age for the court set up to prosecute war crimes suspects in countries unable or unwilling to try them. So far, prosecutors have opened seven investigations and have just five suspects in custody, including former Ivory Coast President Laurent Gbagbo and former Congo Vice President Jean-Pierre Bemba.

However, questions still remain about its effectiveness. The court has no police force to arrest suspects and can only launch investigations in the 120 countries that recognize its jurisdiction, or if the Security Council orders a probe.

That means that the court is powerless to intervene in the bloody conflict tearing Syria apart because Damascus has not recognized the court and the Security Council is bitterly divided.

The inability of the court to have suspects arrested turned into a global online sensation last week with the release of the Kony 2012 video by American activists, which highlighted the case of notorious Ugandan rebel Joseph Kony, the first person indicted by the court who remains a fugitive more than six years later.