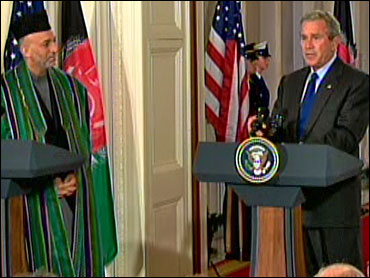 The Security Council approved plans Thursday for factions in Congo's many-sided war to withdraw from the front lines next month as U.N. observers move in to monitor an end to the fighting.

A resolution approved unanimously by the 15-nation council also presses Joseph Kabila, the Democratic Republic of Congo's new president, to move ahead quickly on a promised dialogue with his political foes and the various rebel groups in hopes of national reconciliation and, eventually, free elections.

The resolution was the latest boost for peace in Congo after 30 months of war in the vast central African nation.

The younger Kabila has reversed key policies of his father and authorized the start of a dialogue with political foes while inviting in U.N. peacekeepers without the precondition that foreign forces first leave Congolese territory.

"Of course, it's only the beginning of a long journey, but it's a good beginning," French ambassador Jean-David Levitte said late Wednesday after the council finished drafting the resolution.

When asked why he thought this proposal might succeed where others had failed, Levitte said prospects for peace had improved in the past few weeks.

Rwanda has pledged to pull back its troops 125 miles from their front lines and Uganda has said it will withdraw two battalions from Congolese territory.

Passage of the resolution capped a three-day meeting called by the Security Council to move the peace process forward.

The conference, which began Tuesday, brought together cabinet ministers from all six warring nations and top officials of three rebel groups, along with officials of Zambia and Togo, who attended as observers.

The nine are part of a group called the Political Committee, consisting of the signers and observers of a 1999 Congo cease-fire accord reached in the Zambian capital Lusaka that serves as the framework for the current peace drive.

Under the resolution, all sides would have two weeks to withdraw nine miles from the front lines, beginning March 15, under terms of an accord signed in the Zimbabwe capital Harare last year.

The parties would then have until May 15 to come up with plans for the withdrawal of all foreign forces from Congolese territory.

The final text of the resolution removed a proposed September or November target date for foreign troops to have left Congo after the warring sides said they couldn't agree to a withdrawal deadline before they decide how they would arrive at it.

At the same time as the March withdrawal, the United Nations would send 500 observers, backed by nearly 2,500 troops, to monitor the withdrawals.

After members of the Political Committee strongly objected to the small size of the U.N. force, council diplomats agreed to consider sending in additional soldiers if an initia deployment was not enough.

The council last year authorized a force of 5,537 but scaled it back sharply in hopes of getting the contingent quickly into place. U.N. officials have stressed that the smaller force would be unable to stop the fighting, protect civilians or extract military observers who came under threat.

The resolution asks U.N. Secretary-General Kofi Annan to recommend when conditions would allow him to deploy U.N. forces in Goma or Bukavu, the eastern border areas near Rwanda.

Rebels backed by Rwanda and Uganda took up arms in August 1998 to oust Laurent Kabila from power. Zimbabwe, Angola and Namibia joined the fray to support Kabila.

Rwanda has said it entered the conflict to guard its borders against incursions by Hutu fighters who fled their country after a 1994 massacre of Tutsis, who now control the Rwandan government.

It says it will require security guarantees along its border before it can withdraw from Congo.