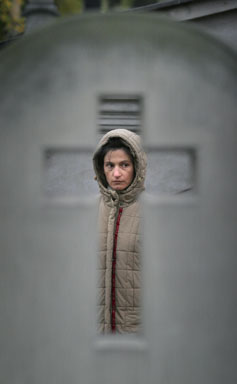 A former doctor already convicted of killing three patients in New York admitted Wednesday to killing a woman at Ohio State University's hospital, where authorities believe he began a string of poisonings.

Michael J. Swango pleaded guilty in Franklin County Common Pleas Court to aggravated murder in the January 14, 1984 death of Cynthia Ann McGee, 19, a gymnast who was recovering from a car accident.

Swango, 45, admitted injecting McGee with a deadly dose of potassium when he was an Ohio State intern. He agreed to be returned to Columbus to answer to the aggravated murder charge last month after he pleaded guilty in U.S. District Court in New York to the three 1993 murders at a Long Island veteran's hospital.

Judge Lisa Sadler sentenced Swango to life in prison with the chance of parole after 20 years. Aggravated murder was the most severe penalty he could get in 1984, when McGee died.

Swango made no statement and stood looking at the judge with his chin slightly raised.

Swango already has been sentenced to life without parole for the three New York murders in a plea bargain that spared him the possibility of the death penalty. He will be sent to a maximum security prison in Florence, Colorado.

Prosecutors say they needed Swango's admission to charge him in Ohio because they had only circumstantial evidence—a nurse's account that she had seen him entering McGee's hospital room with a syringe just before the patient lapsed into a coma and died.

McGee, of suburban Dublin and a student at the University of Illinois where she was on the gymnastics team, was recuperating from an accident.

After her death, Scott Bone, the 17-year-old driver of the car that struck her bicycle, was convicted of reckless homicide and sentenced to 30 months' probation and 1,000 hours of community service. Bone and his family have refused comment on the Swango case.

Authorities considered suspicious the deaths of at least six patients, including McGee's, while Swango was at Ohio State during the 1983-1984 school year. Ohio State barred him from returning for a second year.

He then secured jobs in other hospitals, including in Zimbabwe, by lying. The African nation, where he also is suspected of poisoning patients, has agreed not to press charges.

Federal prosecutors charged Swango with the New York killings days before he completed a 42-month prison sentence for lying on an application for a residency at Stony Brook University Medical Center on Long Island. He admitted failing to disclose that he had spent 30 months in jail and lost his medical license in 1985 for poisoning six co-workers in Quincy, Illinois.

A book about him, Blind Eye: The Story of a Doctor who Got Away with Murder, suggests that Swango might have killed up to 35 patients as he moved from hospital to hospital.

Family awarded $10.5 million for newlywed beheaded by gate at Utah park
Thanks for reading CBS NEWS.
Create your free account or log in
for more features.
View CBS News In
CBS News App Open
Chrome Safari Continue
Be the first to know
Get browser notifications for breaking news, live events, and exclusive reporting.