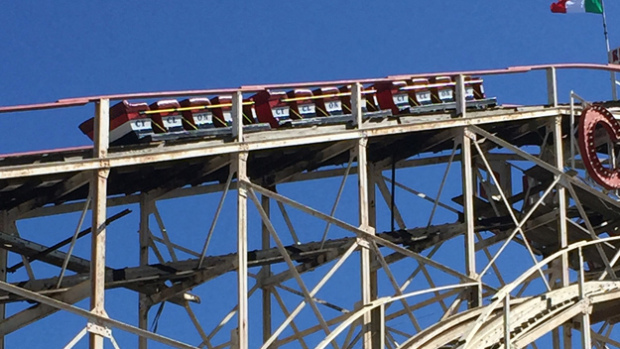 NEW YORK -- Roller coaster season is underway at New York's Coney Island, but its most famous coaster apparently didn't get the memo.

The iconic Cyclone, on its first run of the season at Luna Park in Brooklyn, got stuck on the tracks Sunday about 10 feet from its highest point, CBS New York reported. Approximately two dozen riders were helped down by Coney Island workers along a walkway adjacent to the tracks.

The riders had been stranded on the coaster about 15 minutes, but no injuries were reported.

Officials say a safety mechanism prevents the cars from rolling backwards if it gets stuck on the incline. Still riders said the experience was scary.

"We could feel that there was something wrong," one woman said. "It started slowing down."

Although it has not been confirmed what caused the stoppage on the 88-year-old ride, but Luna Park spokeswoman Erica Hoffman said that it was likely a small mechanical glitch.

Technicians were working to correct the problem, but the ride had not reopened by mid-afternoon on Sunday. The ride had been awaiting an inspection by the New York Buildings Department, according to CBS New York.