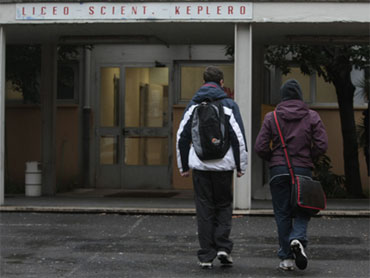 The decision by a Rome high school to install condom vending machines has set off a storm in Italy, with the Catholic Church charging the move will encourage young people to have sex and Rome's mayor saying it sends the wrong message.

But the Keplero high school vowed Thursday to go ahead with its experiment, billed as the first in the capital. While it's a relative novelty for Italy, schools in several other European countries have installed the machines in hopes of curbing teen pregnancy and HIV.

"This is not about stimulating the use of condoms or intercourse," Antonio Panaccione, the school headmaster, told The Associated Press. "On the contrary, it's about prevention and education."

The school plans to install six vending machines as part of educating students about sexuality and HIV protection. The price: euro2 (US$2.70) for a pack of three, lower than market prices.

Cardinal Agostino Vallini, the pope's vicar for Rome, said the decision trivialized sex. He said it "cannot be approved by Rome's ecclesiastical community or by Christian families who are seriously concerned with the education of their children."

The newspaper of the Italian Bishops' Conference said Thursday that sex was being reduced to "mere physical exercise." The newspaper, L'Avvenire, lamented that young people these days have no spiritual guidance on sexuality, and that educators are more concerned with "the health and hygiene consequences of sex" than its moral implications.

The Vatican opposes artificial contraception. Catholic teaching views sex as a means for procreation within marriage.

Pope Benedict XVI drew criticism from European governments, international organizations and scientists last year when he said distributing condoms was not the answer to Africa's AIDS problem, and could make it worse. He said a moral attitude toward sex — abstinence and marital fidelity — would help fight the virus.

"The scandal is that we do it in Rome, because this is the city of the pope and therefore one can't really talk about sex," Panaccione said in a phone interview. "They can talk about pedophilia, can't they?" he said, referring to a sex abuse scandal rocking the Roman Catholic Church in several European countries.

But some criticism came from outside the church, too.

A leading association of parents, MOIGE, said the move was "trivial and insufficient." Rome Mayor Gianni Alemanno, a conservative, was quoted by the ANSA news agency as saying that "on the one hand it's childish to think young people need these vending machines, on the other hand it seems like a bad message to them."

The head of Italy's national association of Catholic pharmacists, Piero Uroda, suggested condoms were responsible for increased rapes and violence.

Panaccione said condom distribution was only part of the sex education curriculum. The school enrolls about 860 students aged 15-19 at two venues — one in a lower-middle class neighborhood, one in a blue-collar area.

Panaccione said the decision was taken because of the rising number of HIV cases among young people, and to break a taboo still surrounding the use of condoms in Italy.

LILA, a national association for the prevention of HIV/AIDS, said distributing condoms could help combat HIV among the young.

Teen pregnancies have been on the rise in Italy, although not sharply. According to the latest figures made available by national statistics agency ISTAT, there was a 0.5 percent increase in teen pregnancy between 2006 and 2007.

On average, Italian women have sex for the first time at age 16, according to SIGO, a group of Italian gynecologists and obstetricians. Almost four in 10 have unprotected sex the first time.

European countries including Belgium, Britain, Germany and the Netherlands have had instances of schools selling condoms. Spain, like Italy a predominantly Catholic country where the church still has some influence on society, has a few schools in the Catalonia region with condom vending machines.

In France, nearly 96 percent of high schools — public schools and private schools that receive state funds — have condom vending machines, according to a survey conducted by the Education Ministry last year. The prevalence results from a 2006 government circular urging high schools to install them.

However, students at Lycee Carnot, a public high school in western Paris, appeared divided Thursday about whether condom dispensers in their school were useful.

"I think it is a good idea. More is better than less. And it is less expensive than in a drugstore," said Alexis Freiberg, an 18-year-old.

There have been some cases of condoms being distributed at public schools in the United States, but it is not commonplace.

In Italy, the only other reported case of a condom-vending machines was in a Turin school over a decade ago. ANSA reported the machines were eventually removed since they weren't being used.

The Vatican still has some influence on Italian society and politics. Its views on sexuality, marriage and contraception are often echoed by the powerful Italian Bishops' Conference and typically get significant coverage.

Panaccione said the reason Italy is less progressive regarding sex education than other countries lies not with the Vatican alone, but also with the "duplicity and reluctance of many families, which to this day still look the other way."

"To them this is a dogma: One must not talk about it, only do it — secretly!" he said.

Elena Bucchinelli, a high-school student in Rome, said she approved of the Keplero initiative.

"We young people are the most vulnerable to the risks of unprotected sex. Schools and families are the best places to receive this kind of information," the 16-year-old said, as she drove her moped to a public school downtown Rome.

"Many young people think they know all that there is to know about sex," she said, "but that's not true."