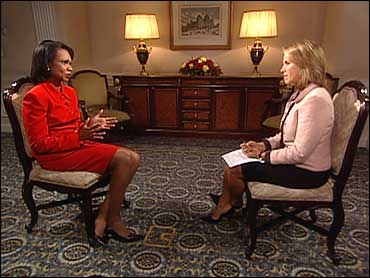 As National Security Advisor, and now Secretary of State, Condoleezza Rice is one of the chief architects of American foreign policy, a foreign policy as bold and far reaching as any in recent times. She has become the central figure at the president's side in defending the war in Iraq and the war on terror and she is not just towing the line.

As Katie Couric reports, Condi Rice is a true believer. What 60 Minutes learned, in a series of interviews, is that this smart, tough, deeply religious woman sees the struggle against the enemies of the United States as a fight of good versus evil – a lot like the struggle she experienced as a child growing up in segregated Birmingham, Alabama.

"I probably have at one level, a better understanding, or perhaps, let me say a more personal understanding of what the dark side of human beings can look like. I remember very well in 1963 when Birmingham was so violent. When it acquired the name "Bomb-ingham," Rice recalls. "That even with my wonderfully protective family, you had to wonder why are they doing this to us? And on the other hand, I have a great faith in the ability of people to triumph over the dark side of human beings."

Condi Rice learned about the dark side when she was just eight years old. She remembers feeling the earth shake when a Baptist church was bombed by racists one Sunday morning just two miles from her home. The victims were all young black girls.

Four girls died in the bombing and the incident had a major effect on Rice.

"Well, we knew those little girls. Denise McNair was my little friend from kindergarten," she recalls. "And she was a playmate and I just couldn't believe that she was dead. And she was not, of course, the only one. Addie Mae Collins was in my uncle's homeroom in school. These were innocent children, this was homegrown terrorism, I know a little bit of what it's like to have somebody try to terrorize a community. These little girls weren't gonna hurt anybody. They didn't have any political power. This was just meant to terrorize the community."

"Do you ever draw parallels between bigoted bombers in Birmingham and suicide bombers in the Middle East?" Couric asks the secretary of state.

"Sure," she replies. "Because the people who commit terror against innocents do it for the same purpose. Some people say well they do it to prove a political point. Then why go after little girls? Or innocent people standing at a bus stop in Britain or in Madrid?"

"And it's the worst kind of inhumanity to just go after innocent people who are just going about their daily lives like those little girls who were just in the bathroom after Sunday school," Rice says.

Condi Rice's father was a Presbyterian minister and guidance counselor; her mother was a science and music teacher. Her parents guided their only child through extraordinarily difficult times in the early 60s in Birmingham, a time, she remembers, when African Americans were treated like second-class citizens, forced to use separate water fountains and separate bathrooms. A time when water hoses were unleashed on civil rights protesters, including children.

Asked to describe what it was like for a young African American girl, Rice says, "Nobody lived in an integrated fashion. Since you couldn't go to a restaurant until 1964, or stay in a hotel, or go to a movie theatre unless you wanted to sit up in the rafters … in the black only section …colored-only section. And my parents were determined to try and shield me from some of those humiliations. So, I can remember very well that if it meant drinking at a black water fountain, it was just, 'We'll just wait 'till we get home.' And that's how a lot of parents dealt with segregation with their kids. I can't tell you how hard parents worked to make sure that you understood that racism and Jim Crow and all of that was not about you, it was about them. It was their problem, not your problem."

Today, living in an elegant apartment at the Watergate complex in Washington and afforded all the luxuries as Secretary of State, Condi Rice, a descendant of slaves, has never forgotten the experiences of her childhood.

How did it shape her world view?

"Well, growing up in the South and having people underestimate you because one of the reasons for segregation, one of the reasons for the separation of the races was supposedly, the inferiority of one race to the other," she explains. "And so when I look around the world and I hear people say, 'Well, you know, they're just not ready for democracy,' it really does resonate. I hear echoes of, well, you know, blacks are kind of childlike. They really can't handle the vote. Or they really can't take care of themselves. It really does roil me. It makes me so angry because I think there are those echoes of what people once thought about black Americans."

It's the same argument she uses to defend the difficult war in Iraq and the Bush administration's goal of spreading democracy around the world.

She is said to be closer to the president than any Secretary of State in more than 50 years and is legendary for her loyalty. When Mr. Bush appeared on the aircraft carrier USS Abraham Lincoln and the message was "mission accomplished in Iraq," Condi Rice was there, ever the loyal soldier.

"You used your credibility to rally the American people behind this. Now it turns out there were no weapons of mass destruction. Do you regret using that?" Couric asks.

"I don't regret at all overthrowing Saddam Hussein," she replies.

"But that's not the question," Couric remarks.

"Do I wish the intelligence had been better? Absolutely. I have wished every day since we learned. The idea that somehow because the intelligence was wrong, we were misleading the American people, I really resent that," Rice says.

"I really resent it," Rice says. "I resent it, because the administration was using the best available intelligence. And so everybody thought that Saddam Hussein had weapons of mass destruction. He'd used them, for goodness' sake."

"You have conceded that lots of mistakes have been made in Iraq. Vice President Cheney says if he had to do it again, he'd do it the same way. Do you agree?" Couric asks.

"Well, I would certainly do it again," Rice says.

Asked if she would do it the same way, the secretary says, "Nobody can go back and reinvent the past. We can't do it, Katie."

"But you can learn from your mistakes," Couric remarks.

In the time 60 Minutes spent with the secretary, an exercise session was one of the few moments we found her alone. She works out six days a week, starting at 5 a.m., often to the music of Led Zeppelin or Cream.

But it's classical music that really moves her. As often as she can, she gathers a group of four friends for an afternoon of Schumann or Brahms. And, no surprise, every piece is followed by a debriefing.

"It's hard to imagine my life without music. I certainly find it as a way to completely transport into another world," Rice explains. "I've been asked – you know, 'Is it relaxing?' And I say, 'Well, it's not exactly relaxing, struggling with Brahms.' But it is transporting. You're just in another world. Life is much fuller when I've got my music."

Life is very full for this 51 year old overachiever, a woman who graduated from college Phi Beta Kappa at age 19. She's treated like a rock star and everything from her sense of style to her possible suitors is the subject of endless gossip. Esquire readers voted her the woman they'd most like to take to dinner.

Rice acknowledges her prominent position and hectic schedule makes it difficult to have a social life.

"How does one go about asking the Secretary of State out on a date?" Couric asks, laughing. "Hi, Madame Secretary? Listen."

"Well, I won't even go there on the second question. But I have got great friends and people that I see."

But these days she's consumed by waging war and promoting democracy. And when she defends her position, this former Stanford professor can at times sound like she's lecturing a class.

"Is it really priority number one in terms of philosophically and pragmatically for the United States to be spreading democracy around the world?" Couric asks.

And the future is what she focuses on. A passionate student of history, Condi Rice believes turmoil often precedes periods of peace and stability.

And she rejects the notion that the U.S. is a bully, imposing its values on the world.

"What's wrong with assistance so that people can have their full and complete right to the very liberties and freedoms that we enjoy?" Rice asks.

"To quote my daughter, 'Who made us the boss of them?'" Couric remarks.

"Well, it's not the matter of being the boss of them. It's speaking for people who are voiceless," Rice says.

"You have said that your goal was, quote, 'To leave the world not just safer but better.' Right now Iraq doesn't seem safer," Couric remarks. "Iran and North Korea have not fallen into line. Do you honestly believe that the world is safer now?"

"The world is safer because we're finally confronting these terrorists. We're finally confronting this challenge," Rice says. "And so I think we are safer. We're not yet safe. And I know that I'm not going to see the final outcome of the Middle East that we described as democratic and prosperous and, in that way, truly stable. But all that I can do on my watch is to try to lay a foundation so that that will become the Middle East of the future. And I think we've done a great deal to begin to lay that foundation."
Produced By Tom Anderson